Palestinians and Arab Israelis across the country held demonstrations on Sunday night against Israeli policies in Jerusalem, with fierce clashes continuing in the holy city. At least 25 people were wounded and 23 people arrested.

The latest violence comes a day before a contentious Jerusalem Day march was set to go ahead, despite reported warnings from security officials that the event could lead to a further major escalation in violence.

Clashes broke out again between Israeli forces and Palestinian demonstrators in East Jerusalem’s Sheikh Jarrah neighbourhood on Sunday night, which has emerged as a flashpoint due to the pending eviction of several dozen Palestinian residents in favour of right-wing Jewish nationalists. 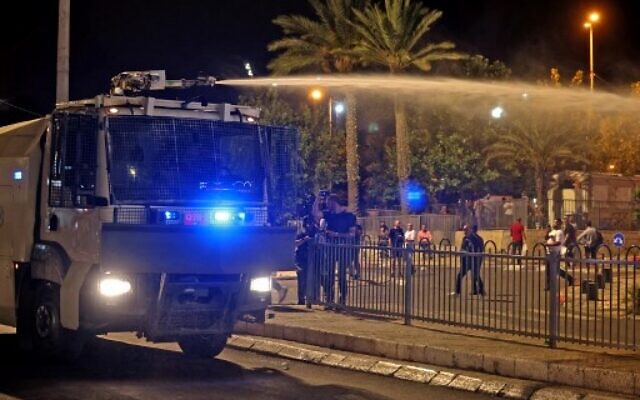 Israeli security forces fire water cannon during clashes with Palestinian protesters outside the Damascus Gate in Jerusalem’s Old City on May 9, 2021. (Photo by Menahem KAHANA / AFP)

In videos circulating on social media, Palestinians could also be seen throwing stones and bottles at police near the Old City’s Damascus Gate. Police fired numerous stun grenades and deployed “skunk” water cannons in an attempt to disperse Palestinians on the scene.

The Palestinian Red Crescent reported that 19 Palestinians were wounded in clashes across Jerusalem on Sunday night, including one of their medics, who was hit with a rubber-tipped metal bullet; five of them were hospitalised.

Violent clashes near Mount Scopus are relatively rare. Recent confrontations between police and Palestinians have largely centred around flashpoint sites in East Jerusalem, such as Damascus Gate and the Temple Mount.

Also Sunday, thousands of Arab Israelis demonstrated in the northern cities of Haifa, Nazareth, Shfaram and Tira. The protesters blocked main roads and, in Nazareth, set trash cans ablaze in the middle of the street.

In Haifa, hundreds of demonstrators marched through the city’s main thoroughfare to the city’s German Colony neighbourhood. 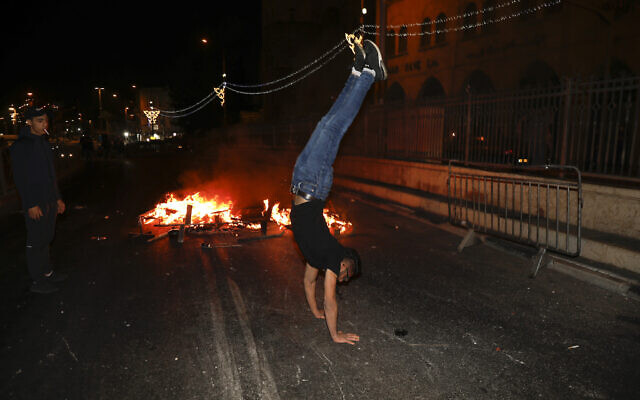 A Palestinian protester does a handstand next to a fire which was set on a road during clashes with Israeli police near Damascus Gate just outside Jerusalem’s Old City, Sunday, May 9, 2021. (AP Photo/Ariel Schalit)

According to Israel Police, demonstrators blocked a main road and threw rocks and bottles at cops. No stone-throwing could be seen in videos circulated on social media. Police declared the protest illegal and arrested 15 Arab Israelis for “rock-throwing and attacking cops.” Police fired riot grenades into the crowd in an attempt to disperse them.

Hundreds of Arab Israelis also demonstrated in Nazareth, waving Palestinian flags as they marched down the city’s main thoroughfare. Five demonstrators were arrested after clashes with police. With spirit and blood we shall redeem you, O Aqsa!” some protesters chanted.

Police could be seen using stun grenades there too.

“Violent arrests in Sheikh Jarrah, stun grenades in Haifa and the government approved the flag parade tomorrow at Damascus Gate. This is seriously escalating the situation — which serves the continuation of the occupation and the politicians who feed on it,”  Odeh said in a statement.

Police Commissioner Kobi Shabtai said he hoped the Flag March would go ahead as planned, and was doing everything he can to ensure this, the Walla news site reported. A further situation assessment is to be held early Monday morning, however.

The march, which annually draws tens of thousands of participants and usually proceeds into the Old City via Damascus Gate and on through the Muslim Quarter to the Western Wall. However, the Damascus Gate area and Old City have seen days of clashes, including a major eruption of violence on the Temple Mount on Friday night.

Jerusalem Day celebrates the unification of Jerusalem, with the capture of East Jerusalem and the Old City from Jordan in the 1967 war, and religious nationalists hold parades and other celebrations in the city. 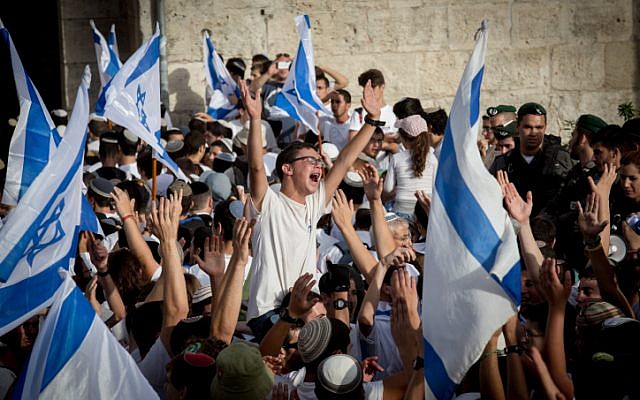 Illustrative: Thousands of young Jewish boys wave Israeli flags as they celebrate Jerusalem Day, dancing and marching their way through Damascus Gate on the way to the Western Wall of Jerusalem’s Old City, June 5, 2016. (Nati Shohat/Flash90)

Security officials reportedly warned the cabinet earlier Sunday that the contentious Flag March could lead to a further escalation in violence.

Religious Jews also visit the Temple Mount on Jerusalem Day. Jerusalem Police District Commander Doron Turgeman said on Sunday night that a final decision on whether to change the route of the march will not be made until a situational assessment tomorrow morning. 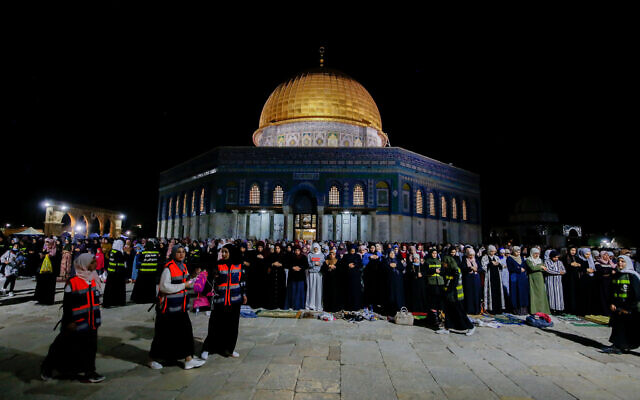 Muslim worshippers pray in front of the Dome of the Rock in Jerusalem’s Old City, May 8, 2021. (Jamal Awad/Flash90)

The protests have devolved into clashes with police, with security forces using high-pressure water cannons and sound grenades to disperse the demonstrators.

But matters came to a head on Friday night, when police clashed with Palestinians on the Temple Mount, a site considered holy by both Muslims and Jews. The site contains the Al-Aqsa Mosque — the third holiest site in Islam — and is revered by Jews as the site of both biblical Temples.

Police fired sound grenades and tear gas on the sacred site, including into the Al-Aqsa Mosque itself. The use of Israeli riot dispersal means on the flashpoint hilltop prompted condemnation by Israel’s Arab neighbours.

Both Palestinians and police blamed the other side for the escalation. Police charged that hundreds of Palestinians had assaulted police with stones and other objects before the confrontation began, while Palestinians decried what they claimed was an assault on peaceful worshipers.

Over 560 Palestinians have been injured over the past few days during clashes with Israeli security forces in Jerusalem, according to the Palestinian Red Crescent. More than 100 were hospitalised, mostly after being wounded by rubber-tipped steel bullets, the first aid organisation said. 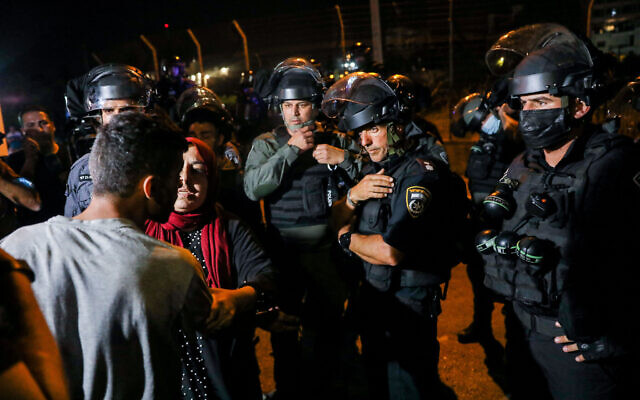 Israeli security forces clash with protesters outside a home of a Jewish family in the East Jerusalem neighborhood of Sheikh Jarrah on May 8, 2021. (Olivier Fitoussi/Flash90)

Former senior officials recommended that both visits to the Temple Mount and the march be barred this year due to the surge in violence, worried that the parade — which many Palestinians view as a provocation — could escalate tensions still further.

“I would eliminate anything that creates friction. Jerusalem is currently a powder keg that could explode,” said former senior military intelligence official Amos Gilad in an interview with Army Radio on Sunday.

In a step towards de-escalation, a potentially definitive Supreme Court hearing on the eviction of the four Palestinian families in Sheikh Jarrah was delayed on Sunday. The hearing had been set to take place on Jerusalem day, prompting fears of violence should the families’ eviction be upheld by Israel’s High Court.

In all, over 70 Palestinians in Sheikh Jarrah are set to be evicted in the coming weeks, to be replaced by right-wing Jewish Israelis. The Palestinians live in houses built on land that courts have ruled were owned by Jewish religious associations before the establishment of Israel in 1948.

A 1970 Israeli law — while not discriminatory on its face — in practice allows only Jews to reclaim lost property in East Jerusalem. No similar law exists that would allow Palestinians to claim their lost property from Israel’s War of Independence inside Israel.