Blue And White And In The Red, Gantz May Be Hanging In Race To Pay Off Debt

Defense Minister Benny Gantz’s Blue and White party has spent the better part of the past month polling just above the 3.25 percent vote threshold for entering the Knesset.

In his best polls, Gantz wins five Knesset seats. In his worst, he falls below the threshold and wins none.

In a race as close as the current one, the potential for Blue and White to get tens of thousands of votes that might have gone to like-minded parties, but still fall short of the threshold, thus essentially voiding them, could give a decisive advantage to the religious-right coalition backing Prime Minister Benjamin Netanyahu — a fact that has led many on the center-left to call for Gantz to drop out of the race.

Gantz has so far refused to do so, arguing that if he did, he would be surrendering his post as “alternate prime minister,” a position written last year into Israel’s quasi-constitutional Basic Laws that grants him, among other powers, a veto over the cabinet’s agenda and control over key ministries in the interim government, including justice, communications and defense.

If he drops out, Gantz has warned ominously, Netanyahu will be left in government a de-facto “autocrat.” Blue and White billboards in Tel Aviv now proclaim: “It’s Benny [Gantz] in the Knesset — or Bibi [Netanyahu] forever.”

There’s just one problem with Gantz’s argument: It’s hard to find an Israeli constitutional lawyer who agrees with him. 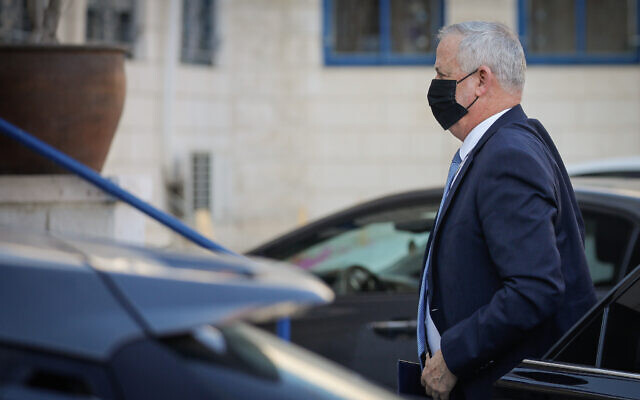 Alternate Prime Minister and Minister of Defense Benny Gantz arrives at the Ministry of Justice in Jerusalem on January 4, 2021. (Olivier Fitoussi/Flash90)

Based on the rules that govern interim governments — the governments that run the country between the dissolution of one Knesset and the swearing-in of a new government by a newly-elected Knesset — Gantz would retain his “alternate prime minister” post and its powers until the new government is sworn in. Crucially, that’s true even if he no longer holds a Knesset seat.

If that’s true, why is Gantz, who once led a 35-seat faction, nevertheless insisting on staying in a race in which the most favorable polls give him scarcely five seats?

Politicians are as complex as any other human being. Gantz may have many overlapping and even contradictory reasons for staying in the race, including ones as prosaic and common among politicians as personal ambition and a healthy ego.

He has already explained in interviews that he believes he can still recover from the political blow of the failure of his unity government with Netanyahu and, over time, become once more a contender for prime minister. He believes he has a loyal base of support and insists everything he did over the past year was for the good of the country. 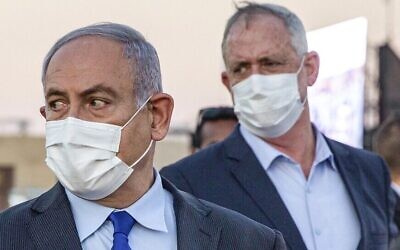 If the polls are right, roughly 150,000 Israeli voters agree with him.

But there may be another reason Gantz is refusing to bow out. His Israel Resilience Party — the official name of the Blue and White faction — is deeply in debt, and Israel’s campaign finance laws guarantee him many millions of shekels in retroactive campaign funding if he manages to squeak past the electoral threshold on election day next week.

Parties with factions in the outgoing Knesset are permitted to take no more than NIS 2,300 ($700) from an individual donor. New or unsuccessful parties running without any Knesset seats are allowed to raise a lot more, up to NIS 11,500 ($3,500) per donor. (The difference is due to the public funding already offered to parties with Knesset factions.)

There’s no real culture of campaign funding in Israel that would make such paltry per-donor sums into a dependable war chest. 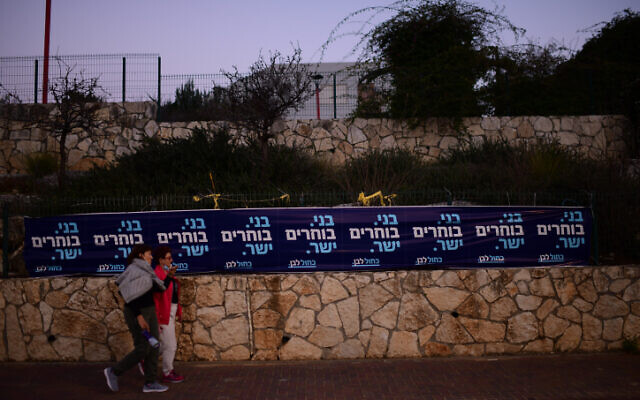 Most political parties, then, rely on borrowing from the Knesset itself to pay for their campaigns — in the hope they will do well enough in the election to win back public campaign funding that will cover their debts.

The Knesset is not a bank, but when elections roll around, it can act like one, loaning campaign funds against a party’s projected vote-total, since the state retroactively pays out millions in campaign funding to parties that successfully win seats.

Parties that run a risk of not making it into the Knesset must provide guarantors in the form of wealthy benefactors who will cover the debt if they fall short.

This method has drawn a great deal of criticism over the years: A campaign funding system built to prevent corruption by ensuring no individual can donate more than a few thousand shekels ends up allowing wealthy supporters to essentially donate millions by agreeing to pay down debts.

In the race for the 24th Knesset, almost nobody is more in the red than Gantz’s Blue and White party, which as of late February had run up debts of some NIS 24.9 million ($7.6 million), second only to Likud’s whopping NIS 64.4 million ($19.5 million). (The Times of Israel was unable by press time to obtain information on guarantors or new campaign expenditures since the end of February.) 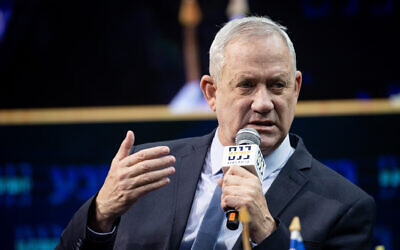 Defense Minister Benny Gantz speaks at the annual Jerusalem Conference of the ‘Besheva’ group in Jerusalem, on March 14, 2021. (Yonatan Sindel/Flash90)

Public campaign funding is calculated by a simple algorithm that provides parties funding based on their relative size. The calculation goes like this: Immediately after election day, you take the number of seats won by the party in the two most recent elections, divide by two (obtaining the average across two elections), add one, then multiply the total by NIS 1.4 million. That’s it.

But wait, there’s more. Each party can also draw on the Knesset’s “continuous funding” budget — money paid by the Knesset to each party based on the number of sitting MKs to help finance its activities. Four years ago that amount was raised to NIS 84,000 per month per MK — or NIS 336,000 per month for a four-seat Blue and White, roughly 4 million shekels per year. 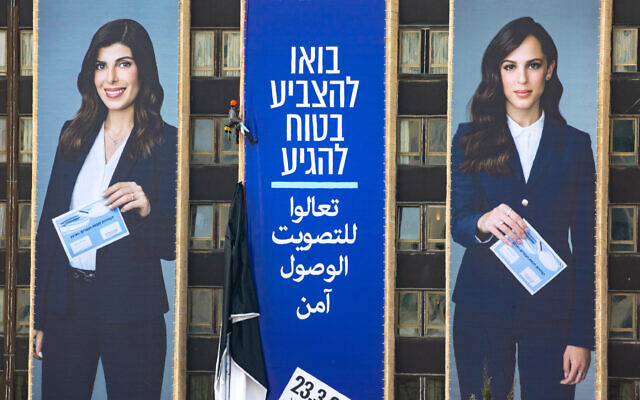 In other words, Gantz can pay off 60% of his debt just by making it into the 24th Knesset, and the rest within roughly two years of sitting in the Knesset as a four-seat party. But it’s money he will only get if he stays in the race.

It is worth noting that the funding formula explains why Likud, in turn, should not be too worried about its much higher debt of NIS 64 million. It won 36 seats in the March 2020 race and is polling comfortably at around 28 in the upcoming one. It can reasonably expect by the same calculation NIS 46.2 million in retroactive campaign funding and NIS 28 million per year in continuous funding in the next Knesset.

There’s another party, its prospects well-nigh hopeless according to polls, whose run may be partly explained by funding needs: Yaron Zelekha’s New Economic Party.

That’s because one need not get into the Knesset to get the payday. Rather, a party only needs to win enough votes to have been able to enter the Knesset before 1988, the year the electoral threshold was raised from 1% to 1.5%.

Israel’s Party Funding Law, the basic legal framework for campaign finance rules, was passed in 1973 and has seen only minimal amendments since. 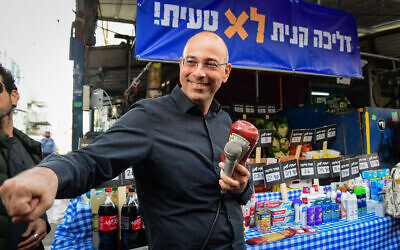 Prof. Yaron Zelekha, head of the New Economic Party, seen at an election campaign event focused on the cost of groceries, at the Carmel market in Tel Aviv on March 9, 2021. (Avshalom Sassoni/Flash90)

That history has left a vestigial funding step at the 1% mark that grants any party that wins 1% of the vote a single MK’s-worth of funding, or NIS 1.4 million.

Zelekha is running a low-budget campaign and has passed the 1% mark in most polls, while falling well short of 3.25%. At this point, a week before the race, getting that 1% may be his best hope for recovering some of the cash spent on his long-shot bid.

None of this is evidence that Gantz or Zelekha or other small parties like Ra’am (with an exceptionally low end-of-February debt of just under NIS 800,000, or $240,000) are running for the money. Israeli public campaign funding is stingy and difficult to obtain. One runs for office in order to win the office itself.

But for many with longshot bids to enter the Knesset, faced with dropping out and helping the bloc, or dragging out their bid in the hopes of covering their expenses, the strange and, critics say, lopsided incentive structure built into Israeli campaign finance laws almost guarantees what the choice will be.