A Sunday TV poll predicted continued deadlock after the election, with the pro- and anti-Netanyahu blocs evenly split and the Islamist Ra’am party narrowly crossing the electoral threshold to become possible kingmaker.

The far-right Religious Zionism party, which has been consistently been polling between four and five seats received six in the latest poll. It was tied with the center-left Labor, led by the only female party leader of this election, Merav Michaeli.

Rounding out the poll was a three-way tie of the left-wing Meretz, the centrist Blue and White and the Islamist Ra’am party, which all received four seats, just crossing the electoral threshold.

The survey indicated that neither Prime Minister Benjamin Netanyahu and his allies, nor those opposed to him, can form a majority coalition of at least 61 seats. Likud, UTJ, Shas and Religious Zionism have 47 seats, which rises to 58 if Yamina joins. The anti-Netanyahu bloc of Yesh Atid, New Hope, Joint List, Yisrael Beytenu, Labor, Blue and White and Meretz also has 58 seats. Ra’am with its four seats could therefore become the tiebreaker.

The Islamist party split off from the Joint List shortly after elections were called, vowing to take a more pragmatic approach that did not rule out cooperating with any coalition, be it right- or left-wing, in order to advance the interests of Israel’s Arab citizens.

While the Joint List, including Ra’am, recommended Blue and White leader Benny Gantz form the government after the March 2020 election in what was an unprecedented move, the Hadash, Ta’al and Balad factions that currently make up the Arab-majority union have made clear that cooperating with Netanyahu in order to keep him in power is a red line. They cite Netanyahu’s years of marginalizing of the Arab minority that they have deemed unforgivable. Ra’am chair Mansour Abbas has said, however, that he is prepared to cooperate with Likud, including on measures to help Netanyahu evade legal trouble, as long as he is able to establish reforms that will benefit Arab Israelis in exchange.

But Ra’am may be competing not just against the Joint List for votes, but also the Likud party, which has run an aggressive campaign targeting Arab voters who are starved for change, after decades of feeling that their representatives have failed to provide results. 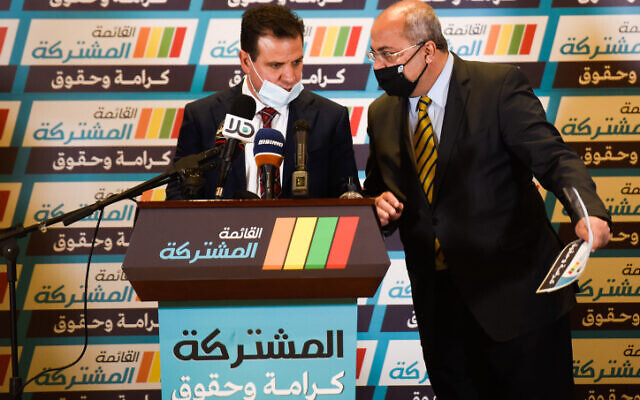 Regardless, much uncertainty still remains, even with fewer than nine days until the election. According to the survey, 38 percent of respondents say they may change their vote before election day. Among that group, 41% say they will make a final decision on election day, 33% say they will decide 24 hours before next week’s vote, and 26% say they’ll decide this week.

In terms of their preferred prime minister, 35% said Netanyahu, 21% said Lapid, 12% said Sa’ar — even though he polled below Yamina — and 10% said Bennett.

While horse-race polls are an almost daily occurrence in Israel in the weeks leading up to elections and are not seen as overly reliable, taken together, the surveys can often serve as a general gauge of the political climate and where the vote may be headed.

The upcoming elections — the fourth in two years — were called after the power-sharing government of Likud and Blue and White failed to agree on a budget by a December 23 deadline.