Mossad Chief Says No Political Ties To Pm, Who Vowed To Give Him Cabinet Post

Responding to a demand that he address concerns that he has political ties with Netanyahu, Mossad chief Yossi Cohen released a statement on Sunday affirming that “there is no and has never been any political relationship between the head of the Mossad and the prime minister or the Likud party.”

Cohen also stated that “all operations” for which he is responsible as Mossad chief “are performed in order to keep the State of Israel and its people safe, regardless of who leads the government.”

The appeal to Cohen, by the Movement for Quality Government in Israel (MQG), came in response to Prime Minister Benjamin Netanyahu’s statement that he is considering including Cohen in his next government. “In the government I will form, I will make sure to use the talents of Yossi Cohen,” the premier had told Channel 13 on Saturday.

In a letter addressed to both Cohen and Attorney General Avichai Mandelblit, MQG, an anti-corruption organization, called on Cohen to “clarify that there is no basis to the prime minister’s remarks and there is no political connection between the two of you.” 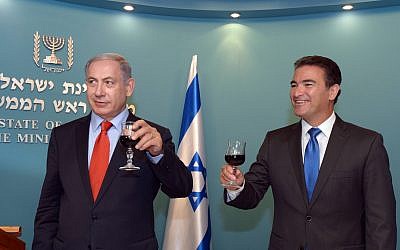 Yossi Cohen, right, head of the Mossad secret service, raises a toast together with Prime Minister Benjamin Netanyahu, ahead of the upcoming Jewish New Year at the PM’s office in Jerusalem on September 7, 2015. (Haim Zach / GPO)

In the same interview with Channel 13, Netanyahu addressed allegations that surfaced last week, claiming that Cohen promised to be loyal to the prime minister and his wife when he sought the position of national security adviser in 2013.

“No such thing happened,” said Netanyahu, “choosing Yossi Cohen was an entirely clean and correct decision.”

The details of the allegation were revealed in testimonies given to police by Hollywood-based Israeli movie mogul Arnon Milchan — who allegedly gave Netanyahu lavish illicit gifts, the subject of one of the three cases against the prime minister — and Milchan’s assistant Hadas Klein. 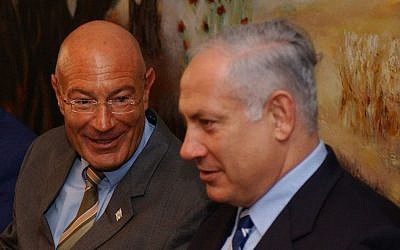 According to the testimony, Cohen contacted Milchan in 2013, when Cohen was a senior Mossad official, and pressured Milchan to promote his candidacy for national security adviser.

“Neither my wife nor Milchan played any part in my decision [to select Cohen],” the prime minister declared on Saturday. Cohen denied the report to Channel 13. Sara Netanyahu also commented that she “rejects the crude lie told time and time again as if she is connected in any way to certain appointments.”

Cohen has long been considered one of the closest confidants of Netanyahu, who has been accused of using the Mossad and the National Security Council — today headed by Meir Ben-Shabbat, another Netanyahu ally — to circumvent the Foreign Ministry in brokering normalization deals with Arab countries.

Cohen has been regarded as Netanyahu’s “shadow warrior” in many covert efforts, including the battle against Iran’s nuclear program, and is seen as the premier’s preferred successor.