Prime Minister Benjamin Netanyahu vowed Saturday that he would not agree to rotate the premiership with Yamina party chief Naftali Bennett in order to form a coalition with him after the election.

Speaking to Channel 13 news, Netanyahu asserted that the only way his political rivals can form a coalition after the election would be “a government of rotations.”

“Bennett says ‘if I’ll have 15 seats I’ll be prime minister,’” he said. “With me, there will not be a rotation. I will not have a rotation with Bennett.”

Bennett is seen as a possible deciding factor following the election. All polls indicate Netanyahu will not be able to form a government without him, and it is not clear whether he’ll be able to do so even with his support.

Bennett has campaigned hard on the need to replace Israel’s current leadership, but has refused to rule out sitting with Netanyahu. 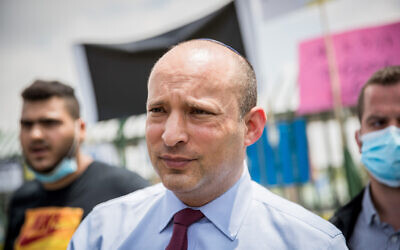 Yamina leader Naftali Bennett at a protest against the state’s intention to close the Hilla Project, outside the Knesset in Jerusalem on August 12, 2020. (Yonatan Sindel/Flash90)

The prime minister’s rivals have warned that Netanyahu intends to do so in order to appoint a more friendly attorney general who will help him avoid his criminal trial.

When asked on the matter in the interview, Netanyahu responded: “I don’t deal with him at all.” When interviewer Ayala Hason noted that he had not answered the question and asked again, he answered: “No.”

But Netanyahu also claimed many details about Mandelblit had emerged that put his conduct in question. “If I had known all the things that later came to light,” he said, trailing off, apparently indicating he would not have appointed him.

As to his criminal trial, Netanyahu insisted that “these cases are crumbling before our eyes.” He maintained that “the truth is so powerful” that no fair trial could find him guilty of wrongdoing. 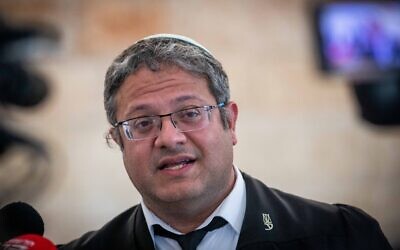 Otzma Yehudit leader Itamar Ben Gvir arrives for a hearing at the Supreme Court in Jerusalem on February 24, 2021. (Yonatan Sindel/Flash90)

On Friday, Itamar Ben Gvir, head of the extremist Otzma Yehudit party, said he would condition his joining a governing coalition on legislation of a law granting Netanyahu immunity in his corruption case and stopping his trial.

And he asserted that the proceedings would not affect his ability to function as prime minister.

This week a former high-ranking official in Israel’s military-industrial complex claimed that years ago Netanyahu’s lawyer David Shimron showed him a contract between Netanyahu and his wife Sara that gives her sweeping control over core aspects of Israel’s national affairs. Supposedly this includes provisions for her to sit in at top-secret meetings and to sign off on appointments of the heads of the Mossad intelligence agency, Shin Bet domestic security service and the Israeli military.

Netanyahu called the claim “an outright lie” and said he was happy that Shimron was suing David Arzi, former vice president of commercial and civil aviation at Israel Aerospace Industries, for libel.

“My relations to my wife Sara are relations of love and of huge appreciation I have for her sacrifice in the face of such lies,” he said. “There are many lies…they lie about Sara because they can’t bring me down at the ballot box. I’m a strong right-wing prime minister so they create a miserable false narrative.”

Netanyahu also said he intended to keep Mossad chief Yossi Cohen in an influential position when he ends his term in the coming months. 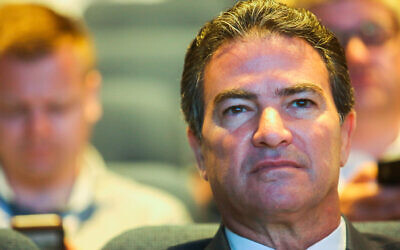 “I am certainly thinking about him playing a part later on. I think he’s had a great contribution. In the government I will form, I will make sure to use the talents of Yossi Cohen.”

Polls have shown political deadlock after the election, with neither Netanyahu nor his rivals having a clear path to a parliamentary majority.

New elections, the fourth since April 2019, were called in December after the power-sharing government of Likud and Blue and White failed to agree on a budget by a December 23 deadline.

The election, like the previous three votes, is largely seen as a referendum on Netanyahu’s rule amid his ongoing trial, as well as his government’s handling of the COVID-19 pandemic.