IDF Declares: We Are First Military In The World With Herd Immunity

The Israel Defense Forces on Thursday announced that its vaccination campaign had successfully given its troops “herd immunity” against the coronavirus, which it said made it the first army to achieve that goal.

“After 10 weeks, I can declare that the IDF is the first military in the world to reach herd immunity,” Maj. Gen. Itzik Turgeman, the head of the military’s Technology and Logistics Directorate, told reporters on Thursday.

According to Turgeman, as of Thursday some 81 percent of the military had received a coronavirus vaccine, had contracted the virus in the past, or both. Within the next week that number was on track to go up to 85 percent, he added.

He said this gave the IDF what’s known as herd immunity or community immunity, in which a sufficiently large portion of a given population is protected against a disease that it is no longer able to spread widely within that group. This claim could not be independently verified. It was not immediately clear how the military’s significant interaction with Israeli civilians would potentially impact this herd immunity.

The IDF’s Chief Medical Officer, Brig. Gen. Dr. Alon Glasberg, said this herd immunity would allow the military to return to more normal operations, though troops would still be required to wear masks, social-distance and abide by other coronavirus-related restrictions in accordance with government policy. 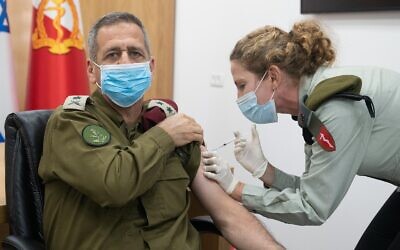 “But things look a lot more like they did a year ago,” he told reporters.

Since the outbreak of the virus last year, the IDF has maintained that its operational capabilities have not been significantly affected by the disease. However, the pandemic has impacted the military’s ability to hold exercises normally, forcing units to scale back or even cancel some of their drills in some cases.

“We can now do things differently. We can train much more freely,” Glasberg said.

The military launched its vaccination campaign in early January, and after five weeks three-quarters of all IDF soldiers had received at least one dose of the vaccine.

Soldiers were not explicitly compelled to receive the vaccine — this was found to be legally problematic — but were heavily encouraged to be immunized. In order to vaccinate troops throughout the country, the IDF set up vaccination centers at various bases and traveled directly to specific units in some cases.

Turgeman said because of the need to keep the vaccines at subzero temperatures, distributing them effectively was by far the most complicated aspect of this campaign, saying it was more of a logistics operation than a medical one. 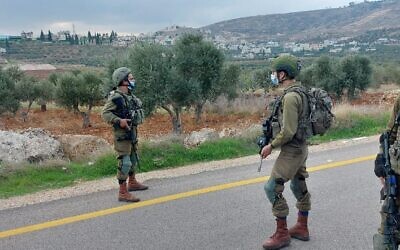 Israeli soldiers stand on a road in the central West Bank where two improvised explosive devices were uncovered on November 22, 2020. (Israel Defense Forces)

“It seemed impossible, but now it’s here,” Glasberg said of the vaccination program.

“We have a lot to be proud of,” the chief medical officer added.

He noted that during the inoculation campaign no doses of the vaccine were wasted.

Yet, according to the IDF, roughly eight percent of troops have refused to be inoculated. Some of those are women in the early stages of pregnancy, while others are acting out of ideological or political motivations, according to Glasberg.

“But the number of people who refuse or don’t want to get vaccinated is getting smaller every day,” he said.

The remaining roughly 11 percent of soldiers who are not fully protected against the virus are on track to become vaccinated, with some having been in quarantine when the campaign started, pushing their vaccination schedule off by a few weeks.

Despite the holdouts, the military said it has seen a precipitous drop in the number of coronavirus cases among soldiers. When the vaccination campaign started, there were roughly 650 troops diagnosed with COVID-19. That grew to over 3,200 in February, but has since dropped to 370 as of Wednesday, according to military figures.