Some 300 Ethiopian immigrants landed Thursday in Israel as part of a government initiative to bring members of the country’s Jewish community to the country.

The new arrivals were greeted at Ben Gurion Airport by Immigration Minister Pnina Tamano-Shata and Jewish Agency chairman Isaac Herzog. They were the last of 2,000 Ethiopian immigrants to arrive in Operation Tzur Israel, which began in December.

“This is a journey that is well underway, but far from complete,” Tamano-Shata was quoted as saying in a Jewish Agency statement.

Tamano-Shata, who spearheaded the mission, said Israel remained committed to bringing over the remaining Jews in Ethiopia.

“Let’s use this moving moment to remember that we have a duty to put an end to this painful saga,” said Tamano-Shata, who arrived in Israel as a young girl as part of Operation Moses, a 1984 airlift that brought 6,000 Ethiopian Jews to the country from Sudan. 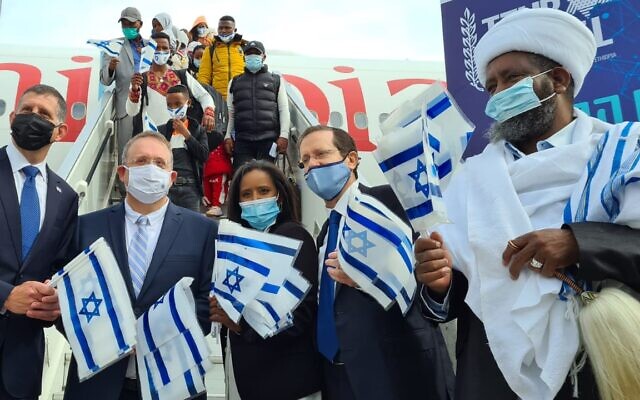 Her comments were echoed by Herzog.

“The final Operation Tzur Israel flight arrived today, reuniting countless families after far too many years apart. This is a moment that tugs at the heartstrings, reminding us that our mission to bring the remaining members of the community waiting to [immigrate] is far from over,” he said.

Following their arrival, the new immigrants were to be sent to quarantine per Israel’s coronavirus guidelines.

The immigrants’ arrival had been set to be marked with a ceremony, but it was called off Thursday by Tamano-Shata over concerns Prime Minister Benjamin Netanyahu and other cabinet members would use it to score political points ahead of the March 23 elections. 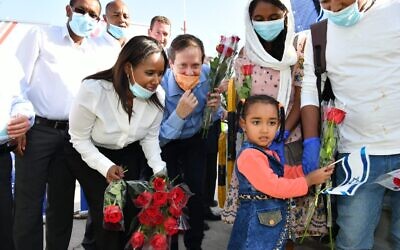 The Blue and White minister made the decision after Netanyahu announced that he would appear at the ceremony, prompting Defense Minister Benny Gantz, who heads her party, to bow out.

Gantz and Tamano-Shata have stated that the immigration and absorption of Ethiopian Jews waiting to come to Israel will remain a core demand of the Blue and White party for any future government. The party also led the initiative to pass Government Resolution 429, which began bringing Ethiopian Jews to Israel in December 2020.

Those still waiting to immigrate to Israel from Ethiopia face increasingly dangerous circumstances. The recent outbreak of war in Ethiopia’s northern Tigray region has killed thousands of people, displaced 2 million and created tens of thousands of refugees in neighboring Sudan. There are thought to be 7,000 to 12,000 Ethiopian community members still waiting to come to Israel, many of whom live in the Tigray region.