The Health Ministry is considering recommending that the next phase of lifting coronavirus restrictions be delayed, according to Hebrew media reports Sunday, amid concerns that illicit mass gatherings over Purim could fuel a spike in COVID-19 cases.

Health Minister Yuli Edelstein is expected to meet with senior officials in the coming days to discuss the third stage in the government’s plan for reopening the economy, the Haaretz daily said.

The next stage in the plan, scheduled for around March 7, includes allowing students in grades 7-10 to return to school in low-infection areas (though Prime Minister Benjamin Netanyahu indicated on Sunday he wants to do so even sooner); reopening restaurants and cafes; permitting hotels and event halls to open in accordance with Health Ministry guidelines; and easing limitations on gatherings.

However, not all of the benchmarks for the reopening have been met yet, such as having over 4 million Israelis receive the second dose of the coronavirus vaccine. The transmission rate has also once again neared 1, with any figure above that meaning the spread of the virus is expanding.

“In the coming days we’ll need to see how the Purim events impact morbidity and decide on the next [phase of reopening],” a ministry official told the newspaper. 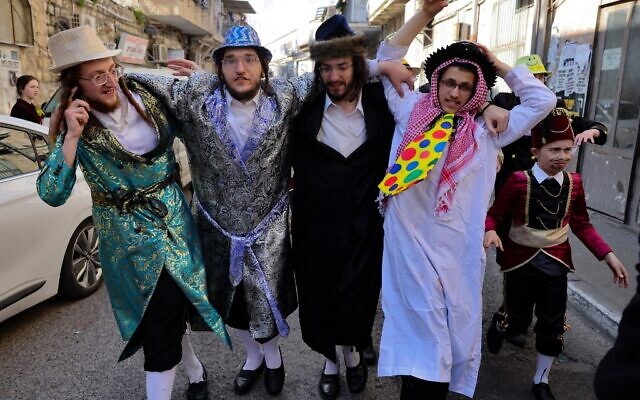 Ultra-Orthodox men, dressed in costumes to celebrate Purim, pictured in the neighbourhood of Mea Shearim in Jerusalem, on February 28, 2021. (Menahem Kahana / AFP)

Health Ministry officials expressed frustration with the inability of police to prevent large gatherings over Purim, with unnamed sources telling Channel 12 News that police had “failed utterly” in enforcement.

Authorities had been concerned about a repeat of last year, when Purim celebrations helped fuel an initial wave of the coronavirus in the early days of the global pandemic. The government urged people to celebrate at home this year, and police attempted to block traffic from entering Jerusalem and declared strict limits on public gatherings.

But the restrictions were not able to prevent street and house parties around the country, including numerous mass gatherings in Jerusalem on Sunday.

Waiting for the rabbis

Meanwhile, a Health Ministry pilot program requiring Israelis returning from abroad who don’t want to quarantine at state-run facilities to wear an electronic bracelet was set to kick off Monday, but a television report said rabbis had yet to okay the program.

The Channel 12 report said the Health Ministry had yet to receive rabbinic approval for ultra-Orthodox Jews to use the bracelets, over fears they could lead to a violation of Shabbat.

An unnamed Health Ministry source told the network the program was becoming a “farce” and that without the rabbis’ okay, it could not fully serve as a means to ensure those quarantining at home are doing so.

Alternative plans being deliberated included finding another type of bracelet acceptable to the rabbis or forgoing the monitoring device and instead increasing enforcement to ensure those isolating at home don’t break quarantine, according to the report. 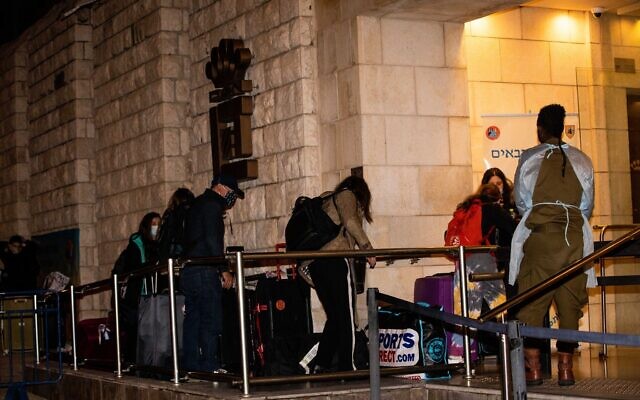 People who flew back to Israel seen arriving at the Dan Panorama Hotel used as a quarantine facility, on December 20, 2020. (Yonatan Sindel/Flash90)

According to a Channel 12 report Saturday, the quarantine hotel program is itself failing to serve its purpose: Only 1,100 out of 6,119 travellers who entered Israel between February 15 and 24 quarantined at hotels, the network said, even though facilities around the country were at only some 10 percent capacity.

Israel’s land and air gateways have been largely closed since January 25, with Ben Gurion Airport shuttered for all but a few special flights by Israeli and some foreign airlines to bring back citizens stranded abroad, leaving thousands unable to return. Entrance into the country — for a maximum of 2,000 people a day — requires special permission by the government that is granted on a case-by-case basis ahead of a flight. 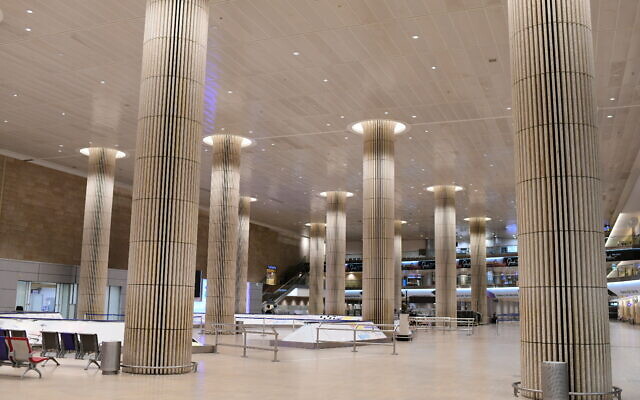 Transportation Minister Miri Regev said Sunday that her ministry will propose a plan to allow all Israelis abroad to return to the country to vote in next month’s elections.

Regev said that entry will be granted without the requirement of permission from the controversial permits committee, which a television report on Friday claimed was giving unequal treatment to Haredi and non-Hardi requests. This led opposition politicians to accused Prime Minister Benjamin Netanyahu of using the committee to allow only potential right-wing voters to arrive in the country ahead of the March 23 elections. Netanyahu and Regev have strongly denied those claims.

Regev told reporters in a briefing that the Health Ministry would need to examine whether the state-run coronavirus hotels would be used for quarantine or if travellers would be permitted to self-isolate at home, perhaps using electronic bracelets.

Ministers will discuss all elements of the proposal at a meeting of the coronavirus cabinet on Tuesday.