Vaccinated people become far less of a COVID transmission risk even before receiving their second dose, a new “game-changing” Israeli study has concluded.

The first mass research of its kind on patients who test positive for the coronavirus and are confirmed to have been at least partially vaccinated, the study found that such patients have far smaller viral loads than those who haven’t received the vaccine.

“Our results show that infections occurring 12 days or longer following vaccination have significantly reduced viral loads,” wrote a multi-institution research team that crunched data from the Maccabi healthcare provider, stating they believe that could be important in “potentially affecting viral shedding and contagiousness as well as severity of the disease.”

The viral load was shown to be reduced fourfold on average for infections occurring 12 to 28 days after the first dose of the Pfizer-BioNTech vaccine. 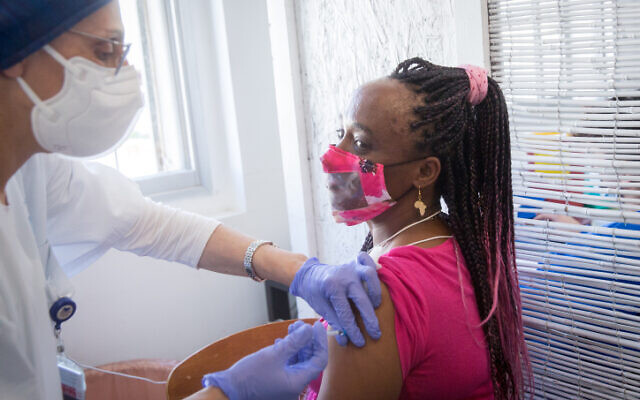 A foreign worker receives a coronavirus vaccine at a vaccination center in South Tel Aviv, administered by the Ichiliov hospital and the Tel Aviv Municipality, on February 9, 2021.(Miriam Alster/FLASH90)

That is considered a time of only partial vaccine protection, as the second shot is administered at 21 days and kicks in a week later. Leading vaccine expert Cyrille Cohen, who wasn’t involved in the study, hailed the results and said they give rise to optimism that the viral load might soon be shown to fall even further after second shot protection.

“This is a game-changer to some extent,” he said. “After all, transmissibility after the vaccine has been one of the most important questions we are asking ourselves.”

Cohen, a Bar Ilan University professor and member of a Health Ministry advisory committee on coronavirus vaccines, said: “This shows that indeed, besides reducing symptoms and hopefully mortality, the vaccine may facilitate reaching some kind of herd immunity, allowing the partial protection of the weak or non-immunized.” 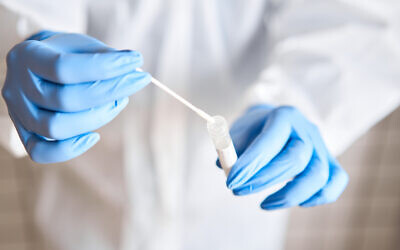 The new study, which has been posted online but not yet peer reviewed, is a collaboration of Maccabi and academics from Tel Aviv University and the Technion-Israel Institute of Technology, supported by the Israel Science Foundation.

It is the first to actually draw conclusions on transmissibility based on analysis of people confirmed to have been vaccinated. Another Israeli study released earlier this week also pointed to reduced transmissibility, but only based on a general drop in viral loads among Israel’s 60-plus age group, the vast majority of whom have gotten the jab.

Samples for the new study all came from patients of Maccabi Healthcare Services and were compared with a control group to reduce the possibility that results reflect the age or gender of people being sampled.

While there is strong data from Phase 3 trials of the Pfizer-BioNTech vaccine, and since, showing that vaccinated people are far less likely to become verified COVID-19 carriers, clinical trials didn’t produce robust results as to whether those who are vaccinated will still spread the virus. Such data is currently the holy grail of vaccine research. 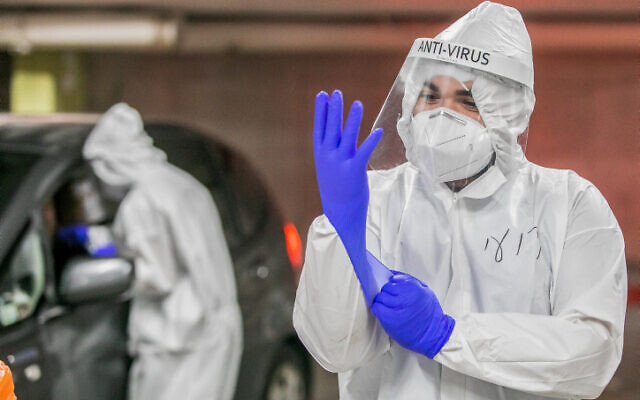 The researchers, led by Technion professors Roy Kishony and Gabriel Chodick, wrote that the world is hoping that vaccination will reduce the transmission rate of the virus, and “this effect can be achieved by reducing the number of susceptible people, as well as by reducing viral loads and thereby viral shedding of post-vaccination infections, turning them less infectious.” But transmissibility data is lacking, and they are trying to fill the gap.

The study was based on all positive post-vaccination samples taken between December 23 and January 25, and tested at Maccabi’s central laboratory. Patients who had a positive sample prior to vaccination were excluded.

While the researchers believe their methodology is sound, they admitted that results could be impacted by undetected issues with the control group, the impact of variants, or from some vaccinated patients showing lingering traces of the virus from an undetected pre-vaccination infection, rather than being infected at the time of testing. But they concluded: “At least for the conditions tested here, the lower viral loads we observe could help tune epidemiological models of vaccine impact on the spread of the virus.”

Cohen commented: “Following the ‘molecular’ aspect of the study, we now wait to see how the effect of reduced viral loads pans out on a population level, and what the implications will be in the pursuit of herd immunity.”