Malka Leifer has not applied for bail during a hearing at a Victorian court less than a day after landing in Melbourne following her extradition from Israel, and almost 13 years after she left Australia amid allegations of child sexual abuse.

Appearing before the Melbourne magistrates court via video link on Thursday morning, Leifer did not speak when magistrate Johanna Metcalf asked if she could hear her, despite police confirming the technology was working.

Leifer slouched forward on to a table and buried her face in her arms on the table in front of her for the duration of the filing hearing. She appeared to be wearing the same clothes and head covering – a religious Jewish custom to maintain modesty – as when she was photographed leaving Israel on Monday. 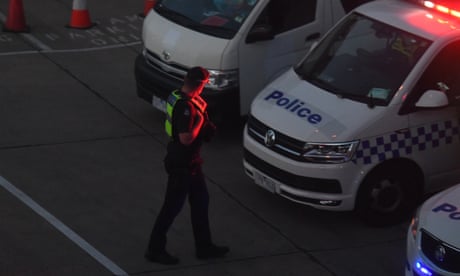 The court heard the 74 counts of child sexual abuse she faces from her time as principal of the Adass Israel ultra-Orthodox Jewish girls school in Melbourne are related to three complainants.

Court documents detailed the 74 charges – consisting of 11 counts of rape, 47 charges of indecent assault, 13 of committing an indecent act with a child, and three of sexual penetration of a child. They took place mostly in Elsternwick, the Melbourne suburb where the Adass Israel School and Adass community is located.

Names of the victims, and details of some charges, were redacted.

There are also charges for acts alleged to have taken place in Rawson, Blampied and Emerald, understood to have related to school camps.

One charge alleges Leifer raped a victim “by compelling (a victim)… without her consent to sexually penetrate Malka Leifer” while Leifer was aware the victim “was not consenting or might not be consenting”.

Another charge alleges Leifer raped a victim “by intentionally sexually penetrating her without her consent…while being aware that she was not consenting or might not be consenting”.

The earliest charge is dated as beginning from 1 January 2004, and the final charges are alleged to have occurred up until March 2008. The police charge sheet alleges that Leifer “fled Australia” on 6 March 2008. The charges were filed in March 2012.

Dassi Erlich, Elly Saper and Nicole Meyer, three sisters who have alleged abuse by Leifer when they were her students, viewed the hearing, which was broadcast to media.

Leifer has consistently maintained her innocence in relation to the charges.

Leifer’s lawyer, Tony Hargreaves, said Victoria police had provided his client with “a number of different types of medication” for “significant mental health issues” during her extradition, and noted she held “very strict religious beliefs” that would have to be accommodated for while in custody.

Hargreaves asked for Leifer to be moved from police custody to a prison, because “there simply aren’t facilities available” to accommodate her religious observation in police custody.

On Wednesday, the principal of the Adass Israel School, Aaron Strasser, announced it would offer an evening of counselling to current and former students, parents and staff, while warning the community not to make any comments to journalists in light of the significant media attention the case has drawn.

“We recognise that Mrs Leifer’s presence in Australia may evoke a range of reactions for our school community, including our staff, students and parent body, and you may be asked questions about the matter in the coming days,” he said.

“We want to assure you that Adass Israel School fully supports the legal process in place and will do all that is requested by the authorities to assist in the processing of this case,” Strasser said.

Leifer, 54, is serving a mandatory 14-day coronavirus isolation period for all arrivals into Australia.

Leifer arrived at Melbourne’s airport about 9pm on Wednesday, where Victorian police received her and ushered her into a vehicle on the airport tarmac.

She was rushed out of Israel before Tel Aviv’s airport was due to be shut on Tuesday as part of tightening coronavirus restrictions, and flew first to Frankfurt, then via Singapore before landing in Melbourne.

Leifer left Australia for Israel in 2008, after allegations were raised, and she has since faced more than 70 extradition hearings over the course of a six-year trial.

Leifer was arrested and placed under house arrest in Israel after extradition orders were filed by Victoria police in 2014. 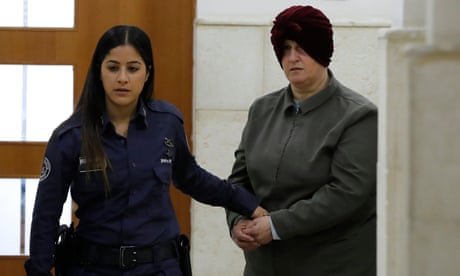 An Israeli court initially found her mentally unfit to be extradited. However, Israeli police rearrested Leifer after private investigators filmed her going about her daily life in the West Bank settlement of Emmanuel where she was living.

The case made further news after accusations that Israel’s then-deputy health minister Yaacov Litzman – who comes from the same sect of ultra-Orthodox Judaism as Leifer – allegedly tried to influence psychiatric evaluations of the former principal. Litzman has denied any wrongdoing.

In December, after Israel’s supreme court found Leifer had been feigning mental illness and was fit to be extradited to Australia, the court rejected her final appeal.

Leifer was remanded to appear before Melbourne magistrates court for a committal hearing on 9 April. She will appear via video link.

This article appeared in The Guardian, the Australian website of the British global online and print newspaper.