Top ultra-Orthodox officials on Sunday blamed police for ongoing clashes between officers and opponents of lockdown restrictions in Bnei Brak, as fresh rioting erupted in the Haredi city.

Demonstrators in the Tel Aviv suburb pushed dumpsters into the street and lit them ablaze, with one video showing officers being targeted with fireworks.

The protesters also threw rocks at a bus and commandeered it, forcing the driver to flee, according to Hebrew media reports.

Police said they would not be deterred by violence and vowed to continue to enforce the national coronavirus lockdown.

The latest clashes came as lawmakers from the United Torah Judaism party and other Haredi officials held a meeting on the roof of the Bnei Brak city hall, placing the blame for the violence squarely on cops and not the protesters.

“The Israel Police carries the blame for the catastrophe taking place in our city for several days,” Bnei Brak Mayor Abraham Rubinstein said.

He accused police of engaging in “provocative activity” and “collective punishment” against the city’s residents.

“It is inconceivable that the police, because of a violation on the beach in Tel Aviv, will close off a neighbourhood and shoot explosives there and smoke grenades and spray [mace] as they did here in Bnei Brak on Thursday night and today,” Gafni said.

Gafni also said prominent Haredi Rabbi Chaim Kanievsky called for a halt to both the protests and “the terrible things” he alleged police were doing to Bnei Brak residents.

Following the meeting, Rubinstein and his deputy were attacked by ultra-Orthodox rioters as they walked through a crowd of protesters in the city.

The two were pelted with eggs, rocks and other objects and were forced to flee, with reports saying security guards had to use pepper spray to distance the mob.

Meanwhile, Netanyahu was asked about his conversations with leading rabbis and why he recently spoke with Kanievsky’s grandson about closing schools during the lockdown and not the rabbi himself.

Responding to mounting criticism against him, Netanyahu added: “I didn’t beg… I said follow the guidelines. That’s my message to the rabbi and he passed on the message I hope. I don’t know if it will have an impact.”

Critics have accused Netanyahu of avoiding cracking down on the Haredi public in order not to anger his ultra-Orthodox coalition partners. 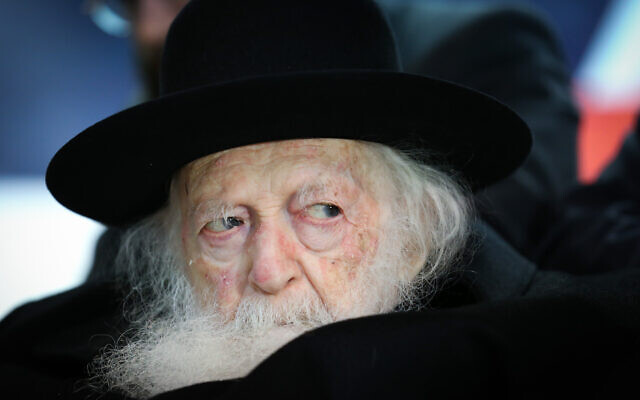 Rabbi Chaim Kanievsky attends a campaign event for the ultra-Orthodox Degel HaTorah party in the northern city of Safed on February 26, 2020. (David Cohen/Flash90)

Nathan Rosenblatt, a resident of Modiin Illit, told Channel 12 new about “the Kristallnacht that the police carried out in Bnei Brak last week,” referring to the “night of broken glass” in 1938 when Nazi forces destroyed Jewish property in Germany, including hundreds of synagogues and thousands of businesses, and arrested more than 30,000 Jewish men.

A representative of the extremist Jerusalem Faction accused cops of carrying out “pogroms,” in an interview with the network.

Earlier Sunday, a policeman shot in the air after rioters surrounded and shoved him and other cops while enforcing lockdown rules in Bnei Brak.

The incident took place amid clashes in at least three cities across Israel as police attempted to enforce coronavirus lockdown restrictions.

Police said the officer felt a “stab” in the back with a blunt object and therefore fired shots in the air to drive the protesters back.

A police statement said a cop suffered head injuries during the clashes and received medical care.

“We will work to locate and fully bring the lawbreakers to justice,” police said. 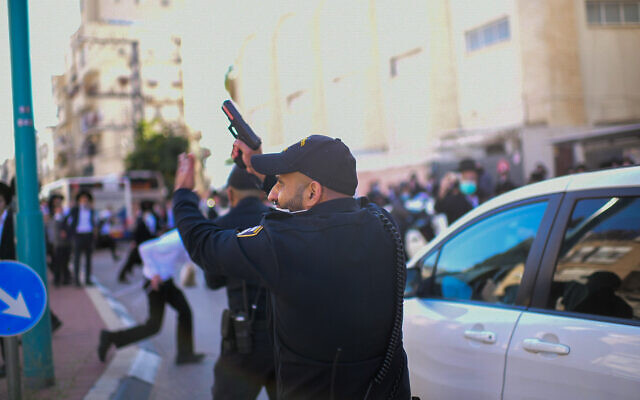 A police officer points his gun in the air during a clash with ultra-Orthodox rioters protesting the enforcement of a lockdown ordered due to the coronavirus, in the city of Bnei Brak, January 24, 2021. (Tomer Neuberg/Flash90)

During the clashes in Bnei Brak, extremist ultra-Orthodox mobs attacked reporters and photographers for major networks Channel 13 and the Kan public broadcaster, throwing various objects at them, including rocks.

Footage showed the journalists running along the street, unable to flee the attacks, asking store owners for shelter.

The head of the police investigations division, Roy Waldman, said in an interview with Channel 13 news that “there’s anarchy in the streets” and decried what he called “a state within a state.” He singled out the hardline Jerusalem Faction group and the Vizhnitz Hasidic dynasty. 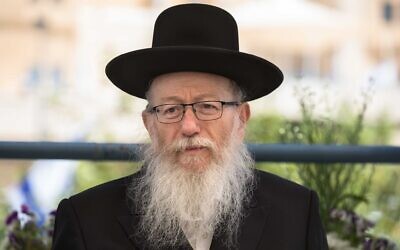 Litzman, speaking at the Sunday night meeting in Bnei Brak, said the resort to the use of guns was unacceptable. “Next, the defense minister will be calling in the air force,” he charged.

Last week, clashes broke out between police and rioters opposed to coronavirus lockdown restrictions in Bnei Brak, after a mob in the city injured a police officer on patrol. At least six people were arrested for disturbing the peace. Those rioters belonged to an extremist faction of the Vizhnitz hasidic sect, according to Hebrew media reports.

There have since been multiple additional reports of lockdown violations among the ultra-Orthodox, including a mass wedding Sunday in Beit Shemesh broken up by police, leading to clashes.