At least seven people were arrested early Wednesday morning as dozens of demonstrators gathered outside Prime Minister Benjamin Netanyahu’s official residence in Jerusalem to protest the delay of a hearing in his corruption trial due to the national coronavirus lockdown.

The session, initially scheduled for Wednesday, would have seen Netanyahu attend the courthouse in person.

Protesters carried burning torches and lit a bonfire outside the residence as they called for Netanyahu to resign. They also read out some of the charges in the three cases against Netanyahu, who is on trial for bribery, fraud, and breach of trust.

The Crime Minister anti-Netanyahu protest group, which organised the rally, noted in a statement that many other court hearings are continuing despite the ongoing lockdown and that the courtroom allocated for Netanyahu’s trial has been renovated and upgraded to enable the prime minister’s hearings to continue even with the restrictions.

“We arrived this morning to remind the defendant that he cannot continue to destroy the country and evade trial,” organisers said in a statement. “If he does not come to court to hear the charges against him, the charges will come to him.”

The group said that many people had participated in the rally despite “the ongoing incitement of the accused and his people toward the demonstrators, which culminated last weekend with the false publicity regarding the attempted storming of the residence.”

For months, protesters have held weekly demonstrations outside the Prime Minister’s Residence and at major intersections and bridges throughout the country. The protesters want Netanyahu to step down over his corruption trial and his government’s handling of the coronavirus outbreak.

Hebrew media reported last Friday that earlier this month Netanyahu and his wife Sara were moved to a secure room in their Jerusalem residence after demonstrators at a weekly protest against the prime minister breached a police checkpoint outside the compound.

According to Hebrew media, Netanyahu, his wife and several other staff members were rushed to the secure side room in the residence, where they waited for roughly 40 minutes before the premier’s security detail from the Shin Bet deemed it was safe for the prime minister to return to work. Eight protesters were arrested.

On Monday the Jerusalem District Court announced that the court session scheduled for Wednesday would be put off until February 8. The current lockdown is set to end next Thursday night, although health officials have warned it could be extended if infection rates do not go down.

The hearing was to have focused on Netanyahu’s response to the criminal indictment against him. It would have been the second time Netanyahu attended a hearing in the case. 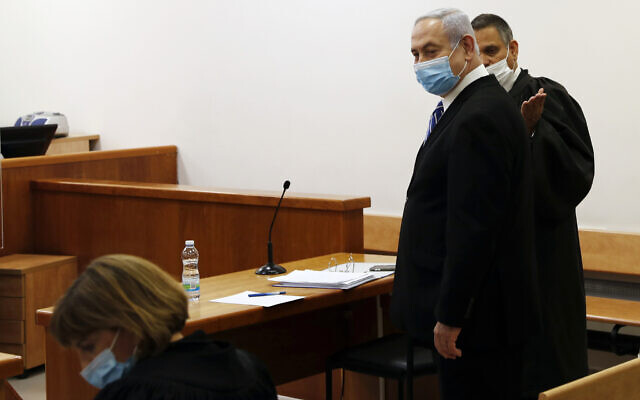 Prime Minister Benjamin Netanyahu, wearing a face mask in line with public health restrictions due to the coronavirus pandemic, stands inside the courtroom as his corruption trial opens at the Jerusalem District Court, May 24, 2020. (Ronen Zvulun/ Pool Photo via AP)

Earlier in January, the judges rejected a request by Netanyahu’s lawyers to delay the hearing for reasons relating to the case itself.

The trial opened in May. Though the prime minister attended the first hearing, he was granted an exemption from appearing at later, largely procedural stages of the trial. 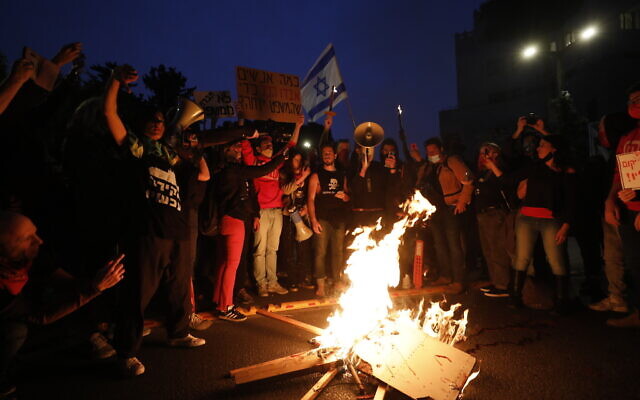 Protesters demonstrators during a protest against Prime Minister Benjamin Netanyahu, outside his official residence in Jerusalem on January 13, 2021. (Olivier Fitoussi/Flash90)

Netanyahu, who is the first Israeli premier to be indicted while in office, denies any wrongdoing and has railed against the courts, prosecution, and media for what he terms a “witch hunt.”

Netanyahu is once again fighting for reelection in March — the fourth national vote to be held in Israel in less than two years. Polls show his Likud party winning the most seats but being unable to form a coalition government because of rivalries with other right-wing leaders.