Rioting broke out in Ashdod on Monday after police were dispatched to the southern town to shutter an ultra-Orthodox yeshiva that had opened in violation of the state-wide lockdown.

Hundreds of Haredi youth clashed with police, who used riot-dispersal measures to break up the demonstration.

Eleven demonstrators were arrested on charges of assaulting police officers. Three cops and two city inspectors were injured in the clashes.

Protesters blocked the road outside the Meir Eini Yisrael Talmud Torah, which is affiliated with the extremist, anti-Zionist Jerusalem Faction. Some also hurled stones and other objects at officers, police said. 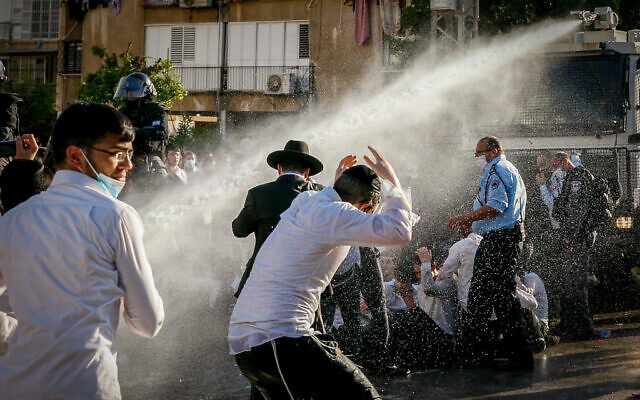 Young Haredi residents of Ashdod clash with police who were dispatched to shutter a yeshiva in the town that was operating in violation of the government lockdown on January 11, 2020. (Flash90)

Since the lockdown began on Friday, dozens of educational institutions in ultra-Orthodox communities have continued to operate, facing only minimal pushback by police. Prime Minister Benjamin Netanyahu’s government has been accused of turning a blind eye to the violations, due to pressure from his Haredi coalition partners.

The vast majority of the yeshivas violating the lockdown were affiliated with extremist sectors of the Haredi community, such as the Jerusalem Faction, with mainstream ultra-Orthodox institutions largely adhering to government guidelines. However, there has been growing speculation that that adherence will not last much longer, given the importance that Haredi community leaders see in keeping their educational institutions operating under almost any circumstance.

“I estimate that by Wednesday [the yeshivas] will reopen,” one yeshiva principal said. 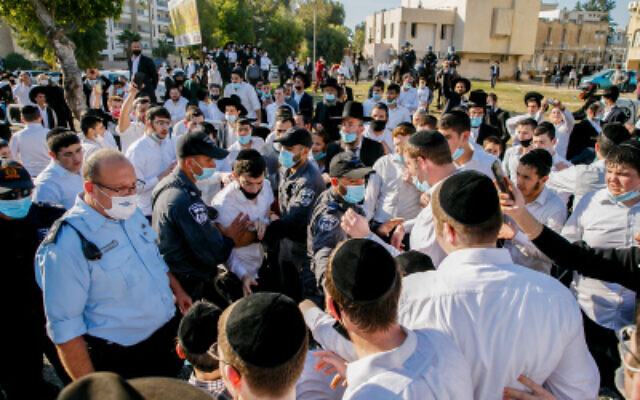 Young Haredi residents of Ashdod clash with police who were dispatched to shutter a yeshiva in the town that was operating in violation of the government lockdown on January 11, 2020. (Flash90)

Just last week, police were dispatched to shut down several indoor weddings that were being held in violation of health guidelines.

The Health Ministry official overseeing action to counter the coronavirus among the ultra-Orthodox population revealed last week that the community has recently accounted for over a quarter of all the new cases diagnosed, even though it makes up little more than one-tenth of the total population.