Health providers nationwide began to vaccinate citizens over 60 against the coronavirus Monday, as Israel’s immunisation effort reaches the general public for the first time. A day earlier, 10,000 health workers and some public officials received the vaccine, kicking off Israel’s vaccination campaign.

“It’s just like a regular shot. No pain at all,” Shosh Peri, a woman visiting her husband hospitalised with COVID-19 in Sheba Medical Centre, told Army Radio after she received the shot.

Health Minister Yuli Edelstein called upon all those over the age of 60 to get vaccinated, saying, “This is the only way to fight the virus.”

After those over 60, next in line to be vaccinated will be Israelis working in jobs with a high risk of being exposed to the virus, such as teachers, social workers, first responders, prison staff (prisoners will also get priority), Israel Defence Forces soldiers and other security personnel.

Last will come the rest of the population, with a timeline depending on how many doses arrive in Israel and the level of demand by the priority groups.

Those under the age of 16, as well as pregnant women and people with known and relevant allergies, will not get the vaccine.

The government hopes to inoculate some 60,000 people per day and as many as two million Israelis by the end of January. But Hebrew-language media reports said the first week would serve as a pilot program, tamping down expectations that hundreds of thousands of Israelis would be vaccinated within days.

Despite difficulties getting through on phone lines and hours spent on hold, by the end of Sunday, some 200,000 people had made vaccination appointments with their health maintenance organisations (HMO).

Supplies to the HMOs were said to be falling short of demand, Channel 13 reported.

While 200,000 people have already made vaccination appointments, the country’s two biggest HMOs, Maccabi and Clalit, have reportedly only been given 30,000 and 40,000 units respectively. 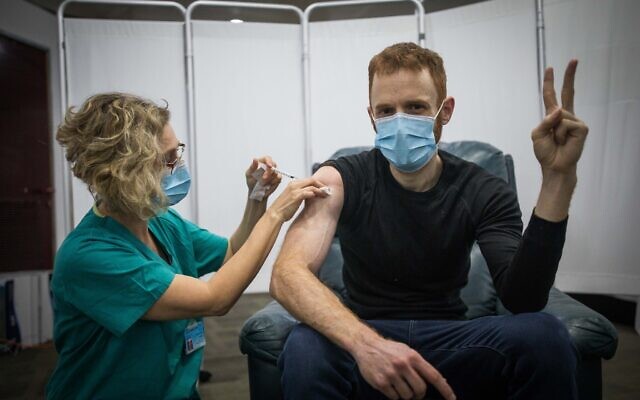 A medical staff member receives a COVID-19 vaccine, at the Hadassah Medical Centre, on December 20, 2020 in Jerusalem. (Yonatan Sindel/Flash90)

Of 70,989 tests returned on Sunday, 4.1% were positive, continuing a trend that has shown the percentage rise almost every day since last Tuesday. The situation appeared to be worsening on Monday. Out of 17,095 virus tests checked from midnight Sunday until the ministry report was published just after 10 a.m. Monday, 4.3% were positive.

There were 2,846 new virus cases diagnosed Sunday and the death toll rose to 3,109. Of the 25,159 active patients in the country, 470 are in serious condition, according to the ministry numbers. Since the start of the virus outbreak earlier this year there have been 376,857 cases diagnosed.