New Elections Near As Likud, Blue And White Say Talks Have Broken Down

New elections appeared almost inevitable Monday evening after the coalition’s Likud and Blue and White parties both said that their negotiations on delaying the deadline to pass a state budget had broken down and blamed each other for the failure to reach an agreement.

Blue and White has walked back all the agreements it reached with Likud, Prime Minister Benjamin Netanyahu’s party said in a statement after Gantz appeared to increase his demands just hours after a bill to delay the budget passed its first Knesset committee reading.

“Due to an internal fight in Blue and White, Gantz has retracted all the agreements reached in negotiations between Blue and White and Likud,” Likud said. “It’s unfortunate that Gantz has decided to drag the country to unnecessary elections at the height of the coronavirus crisis.”

On Monday evening, Netanyahu reiterated his party’s statement blaming Gantz for what is shaping up to be the fourth national vote in two years.

“We worked very hard to avoid elections, unnecessary elections. We reached agreements with Blue and White. I thought they were promising, they were good agreements that could have averted these elections,” he said. “Unfortunately, because of internal pressure inside the party, Benny Gantz decided to renege on [the agreement] and this is dragging the country to unnecessary elections at the height of the coronavirus crisis.”

The accusation came after Gantz, speaking to his Blue and White MKs, said he had laid out five demands to Netanyahu for his party to support the bill to delay the budget in the plenary: passing a 2020-2021 budget; approving all the senior appointments that have been held up; closing all loopholes that would allow Netanyahu to avoid handing over power to Gantz as part of their rotation agreement; keeping Avi Nissenkorn as justice minister; and approving the Knesset rules of procedure.

“If they want it, they’ll take it. If they don’t, there will be elections,” he said. 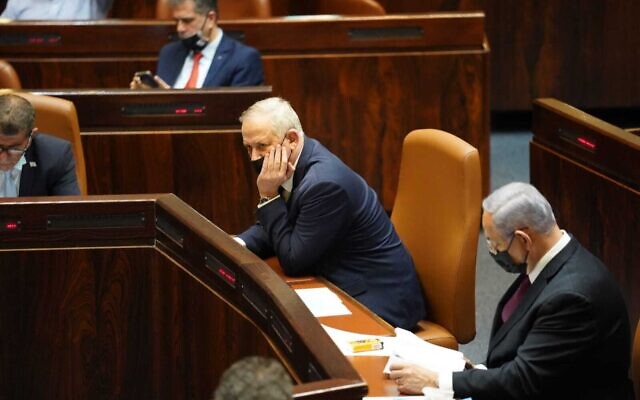 Benny Gantz, left, and Benjamin Netanyahu in the Knesset during a vote for the parliament to dissolve itself, on December 2, 2020. (Danny Shem Tov/ Knesset Spokesperson)

According to the Walla news site, Gantz told his party members that he thinks elections will be called on Tuesday.

“I gave Netanyahu my final offer and he’s supposed to get back to me,” Gantz was quoted saying. “I think he’ll say no and the Knesset will be dissolved tomorrow.”

“If I hear tonight that something can be done on this matter, I will update you. If not, the Knesset will turn into a pumpkin tomorrow night,” he reportedly said, referring to the midnight deadline for the state budget that will see the parliament automatically dissolved if no action is taken to postpone it.

The bill — which requires three readings to pass — was set go up for its first vote in the plenum later Monday evening.

If passed by a majority of MKs, it would delay the deadline to pass a budget for this year from December 23 to December 31. The deadline for approving a budget covering 2021 would be January 5.

The coalition’s Blue and White party has previously said that if the budgets aren’t passed by those deadlines, the Knesset will dissolve and elections will be held on March 23, even though analysts have suggested Israeli law doesn’t allow for elections to be held less than three months after the Knesset dissolves.

The proposal, which was agreed upon late Sunday by Netanyahu and Gantz,  passed its first committee vote by seven to five along coalition-opposition lines, with MKs from government parties unanimously supporting it.

Even with Gantz’s approval however, the bill’s passage in the plenum was far from certain due to a rebellion from a number of coalition MKs, and several supporting lawmakers going into coronavirus quarantine. 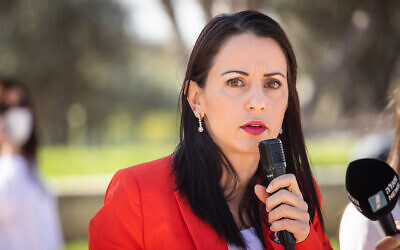 Hours before the committee meeting started, the Knesset spokesperson announced that Blue and White MK Hila Shay Vazan, a member of the committee, had been diagnosed with the coronavirus, putting her into quarantine. As a result, committee chair and fellow party member MK Eitan Ginzburg was advised to also quarantine because he had met with Shay Vazan last week.

Late Monday afternoon, it was announced that Gantz himself would also be going into quarantine due to contact with Shay Vazan.

Additionally, Blue and White MK Asaf Zamir has been reported to oppose the proposed legislation, while party MKs Miki Haimovich and Ram Shefa were also considering not giving their support to it.

All three have previously publicly expressed their unease at their party remaining in partnership with Netanyahu. 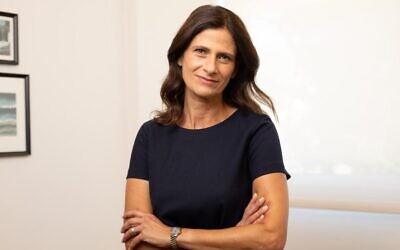 On Monday afternoon, a fourth Blue and White MK, Michal Cotler-Wunsh, joined the rebellion, saying the “lousy” possibility of new elections would need to be considered “in the face of the intolerable reality of a dysfunctional government.”

Before the disagreements within Blue and White, it was already unclear whether there was a majority to pass the bill. The potential rebel Blue and White MKs, coupled with Likud members who have formed a new rival party under MK Gideon Sa’ar, mean that even if a compromise was reached, it would not necessarily have sufficient support in the Knesset to pass.

Added to that is Likud MK David Bitan, who is seriously ill with COVID-19.

Reports of an agreement on delaying the deadline between Likud and Blue and White came on Sunday evening after the latter party appeared to waver in its ultimatum to Netanyahu’s party to pass the budget by Tuesday’s deadline or face a fresh vote.

Under the power-sharing deal between Likud and Blue and White, a failure to pass a budget is the lone loophole that would let Netanyahu avoid having to give up the premiership to Gantz. Likud has been holding up the budget for months in an effort to renegotiate a more favourable coalition agreement that would see Netanyahu’s one-and-half-year term extended at the expense of Gantz’s equivalent allotment of time as premier, which is currently set to begin in November 2021. Likud is also seeking to curb the power of Justice Minister Avi Nissenkorn.

Read more
PrevPreviousVaccine Drive Revs Up As Israelis Over 60 Start Getting Virus Shots
Next5.2 Million Israelis To Be Fully Vaccinated By Late MarchNext