Israel has established full diplomatic ties with Bhutan, a small, majority-Buddhist landlocked kingdom in the Himalayas neighbouring India and China.

The agreement was signed on Saturday at a ceremony held at the residence of Israel’s Ambassador to India Ron Malka, with the ambassador of Bhutan to India Major General Vetsop Namgyel.

Prime Minister Benjamin Netanyahu welcomed the development, calling it an “additional fruit of the peace agreements.”

“We are in contact with additional countries that want to join and establish relations with us,” Netanyahu added.

Israel’s Foreign Ministry said Saturday that Foreign Minister Gabi Ashkenazi spoke with his Bhutanese counterpart, Foreign Minister Tandy Dorji, last week, where the two agreed on the signing date as well as a joint work plan to collaborate in the areas of water management, agriculture, and health.

“The circle of recognition of Israel is growing and expanding,” Ashkenazi said in a Foreign Ministry statement. “The establishment of relations between us and the Kingdom of Bhutan will serve as another milestone in deepening Israeli ties to Asia.”

Israel’s previous lack of relations with Bhutan was not linked to the conflict with the Palestinians nor to the US-brokered agreements seeking normalisation with Israel from Muslim states, but rather a result of Bhutan’s isolationist policies. The remote kingdom has a population of just over 770,000 people and only began allowing foreign tourists into the country in 1970. TV and internet were legalised in 1999. 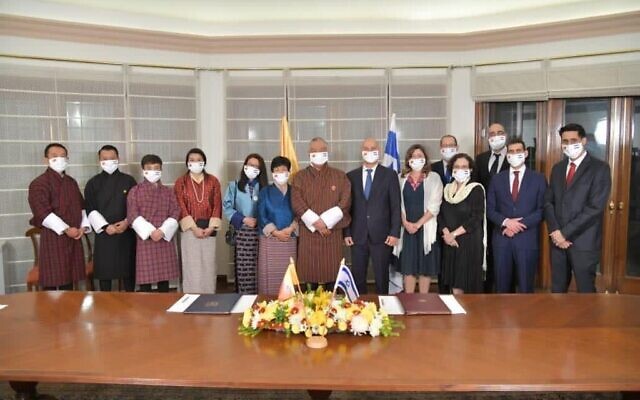 Israel’s Ambassador to India Ron Malka and Ambassador of Bhutan to India Major General Vetsop Namgyel with their delegations at a signing ceremony establishing diplomatic relations between the two countries, December 12, 2020. (Foreign Ministry)

Ashkenazi thanked Bhutan for the move and said he hoped to host the King of Bhutan, Jigme Khesar Namgyel Wangchuck, in Jerusalem for “a first state visit of its kind.”

Ashkenazi also thanked Malka and his staff “for strengthening our relationship with Bhutan and for building the outline that led to the signing of the agreement on the establishment of diplomatic relations between us.”

Malka said he signed the agreement with Bhutan to establish “formal diplomatic relations” on Saturday, calling it a “historic day”.

“This agreement will open up many more opportunities for cooperation for the benefit of both our peoples,” Malka said on Twitter.

The foreign ministry said Israel has maintained secret contacts with Bhutan in recent years that have included visits by delegations from Israel to the Bhutanese capital of Thimphu, and by Bhutan officials to Israel.