Defence Minister Benny Gantz warned Prime Minister Benjamin Netanyahu on Friday that he would not be prime minister again if Israel goes to a fourth election in two years, and once again urged him to pass a national budget.

In a message posted on Facebook, Gantz wrote: “At the end of the fourth election, I know that Netanyahu will not be prime minister of the state of Israel and he also needs to know this.”

“We did not give up on our desire to serve the citizens of Israel in a functioning government, but myself and my colleagues are fed up with the lies,” said Gantz who backed a Knesset committee bill on Wednesday to dissolve parliament and set a March 16, 2021 election date.

But the bill must still clear three readings in the plenum, and Netanyahu and Gantz could yet agree to a compromise to stave off a return to the polls.

“We have to honour our commitments to the citizens — a budget, a functioning unity government, and a commitment to rotation without a get-out card or exit points. That is the only way he can prove that Israelis are not being held hostage by the legal case hanging over his head,” Gantz said.

Even without the bill, the Knesset was already on track to dissolve later this month due to an impasse over the state budget which has long been held up by Likud. Netanyahu is widely believed to be planning to dissolve the government anyway before the 2021 budget must be passed in March, in order to prevent a scenario where, as stipulated by their power-sharing agreement, Gantz will succeed him as prime minister.

Blue and White has been demanding that a state budget be passed for 2020 and 2021 together — also as the coalition deal stipulates — in a bid to force Netanyahu to honour the premiership rotation clause. If Likud continues to resist those demands, elections will be triggered on December 23 at the latest and held three months later. 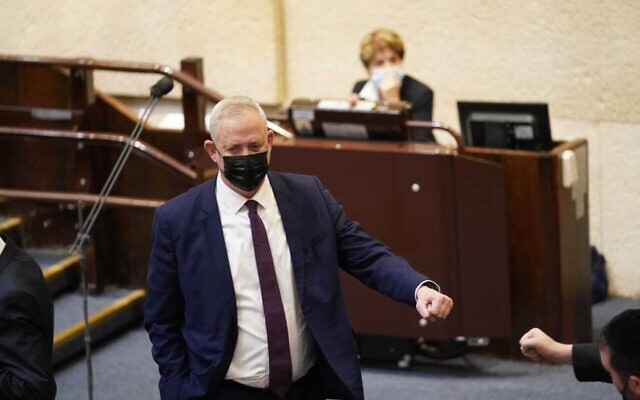 Likud prefers the elections be postponed to summer, when much of the population is expected to already be vaccinated against the coronavirus and criticism of Netanyahu’s handling of the pandemic may ease.

Gantz’s warning that Netanyahu will not be prime minister comes with Israel’s political system in further flux, following the announcement this week that Netanyahu’s rival from within Likud, Gideon Sa’ar, was breaking away to form his own party.

Early polls showed Sa’ar’s nascent New Hope party getting between 15 and 18 seats if the country goes to elections — shaking up the political landscape and introducing several potential paths to coalitions that do not include Netanyahu, while seriously narrowing the premier’s path to leading the next government.

The polls also showed Blue and White, a one-time challenger for the country’s leadership and the centre-left’s greatest hope for retaking power in years, collapsing from its current 14 seats to 6 or 7. (Blue and White won 33 seats in the March 2020 elections, but it split when Gantz joined the coalition, with its Yesh Atid and Telem factions going into the opposition.)

The surveys indicated that Netanyahu’s so-called right-wing bloc, comprised of Likud, Yamina, Shas and United Torah Judaism, would fail to win a majority of 61 seats if elections were held today, upending months of surveys that had shown the four parties passing that threshold easily.