Anti-Netanyahu protesters rallied across Israel on Saturday evening, the 25th straight week of mass demonstrations against the prime minister over his indictment on graft charges and handling of the COVID-19 pandemic.

Police said they arrested four people following an altercation during a protest in Haifa. The detainees were three protesters and a resident of Haifa, according to the Haaretz daily.

In Jerusalem, two protesters were arrested on suspicion of trying to block the light rail. 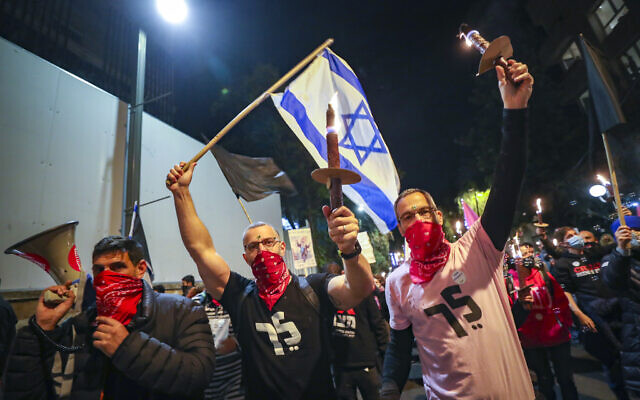 Israeli protesters demand the resignation of Prime Minister Benjamin Netanyahu at a weekly protest in Jerusalem, on December 12, 2020. (Yonatan Sindel/Flash90)

Smaller demonstrations also took place at highway overpasses and junctions around the country on Saturday, including one in the northern Misgav Regional Council where a group of protesters marched with torches. Some demonstrators at the Prime Minister’s Residence also held torches.

Additionally, protesters demonstrated outside the Rosh Ha’ayin home of Defence Minister Benny Gantz over his decision earlier this year to form a government with Netanyahu after campaigning on replacing him.

One of the protest groups promised to hold a “siege” at the Prime Minister’s Residence, after 27 demonstrators were arrested at last week’s demonstration for attempting to block the entrances and exits to the home on Balfour Street.

“We’ll shut him in until he goes,” the Crime Minister organisation said in a statement. 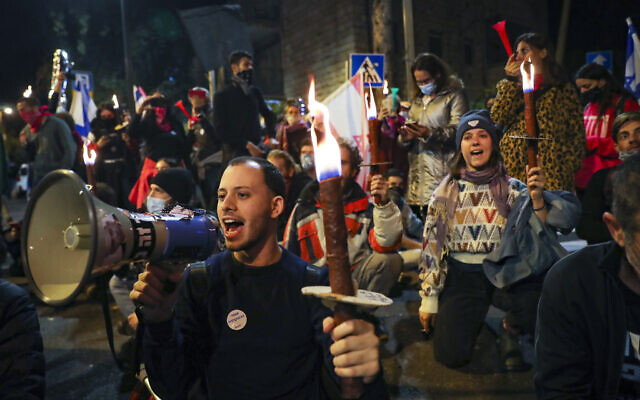 Numerous roads around the Prime Minister’s Residence were closed off by police ahead of the protest.

Recent weeks have seen numbers at the nation-wide rallies dwindle, though last week’s rally in Jerusalem was reported to be considerably larger than those of recent weeks.

Demonstrators have been holding regular protests for months against Netanyahu, demanding he resign over his trial on charges of bribery, fraud and breach of trust. They have also criticised his government’s handling of the coronavirus pandemic. Netanyahu denies wrongdoing and claims the indictments are part of an effort by political rivals, the media, police and prosecutors to remove him from office.