Just ahead of Hanukkah, a forgotten 2,000-year-old engraved drawing of the Temple menorah is again seeing the light of day.

First uncovered 40 years ago during archaeological surveys at Michmas, a Hasmonean stronghold during the Maccabean Revolt, the drawing was never published by scholars and its documentation was left to gather dust on archive shelves. Newly rediscovered, it is included in a new analysis of all available archaeological evidence from Michmas, and has some researchers convinced that the ancient town was once an elusive priestly agricultural settlement.

Michmas, today the Arab village Kfar Mukhmas, about 3 kilometres (1.8 miles) from the modern Jewish settlement of Maaleh Michmas and 9 kilometres (5.5 miles) from Jerusalem, is cited in the Book of Maccabees as the first base for the Jewish leader and future high priest, Jonathan. It is also identified in Mishnah Menahot 8:1 as the provider of the Temple’s semolina wheat.

The new study published in the Hebrew-language journal, “In the Highland’s Depth,” outlines additional physical evidence supporting the hypothesis that ancient Michmas was an agricultural settlement populated mainly by kohanim (priests).

Lead researcher Dr. Dvir Raviv told The Times of Israel on Monday that in general, “We have very little evidence of priestly settlements.” The drawing Raviv stumbled across, he said, is a step towards illuminating that deficit. 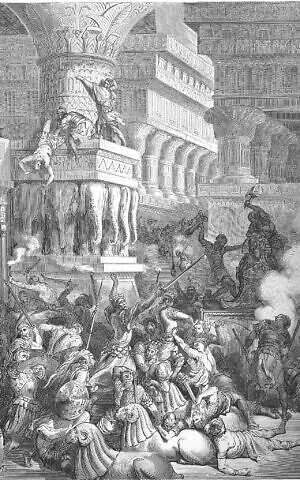 Jonathan destroying the Temple of Dagon, by Gustave Doré. (Public domain via Wikipedia)

Ancient Michmas is most known from the Book of Maccabees. As depicted in 1 Maccabees 9:73, Jonathan, the youngest of the five sons of revolt-instigating priest Mattathias, makes peace with the Seleucid general Bacchides and settles in Michmas ahead of beginning his rule, which spanned 161-143 BCE. “Thus the sword ceased from Israel: but Jonathan dwelt at Michmas, and began to govern the people; and he destroyed the ungodly men out of Israel.” (King James Bible)

“Jonathan’s choice of the town as the base from which to consolidate his control of Judea may have been linked to the location of Michmas in a densely populated area of Jews who supported the Hasmoneans during the years of the revolt,” said Raviv in a Bar-Ilan University press release.

But what if the Michmas townsfolk were not “just” Jews, but rather priests?

As part of the new study, Raviv published for the first time the rare engraving of the menorah — a symbol of priesthood during the Second Temple period — that was discovered in a burial cave in the 1980s and forgotten. In total, the 1980s Benjamin Region Survey undertaken by the Staff Office for Archaeology in Judea and Samaria found four clusters of tombs surrounding the modern Arab village of Mukhmas in the West Bank, with some 70 burial caves. 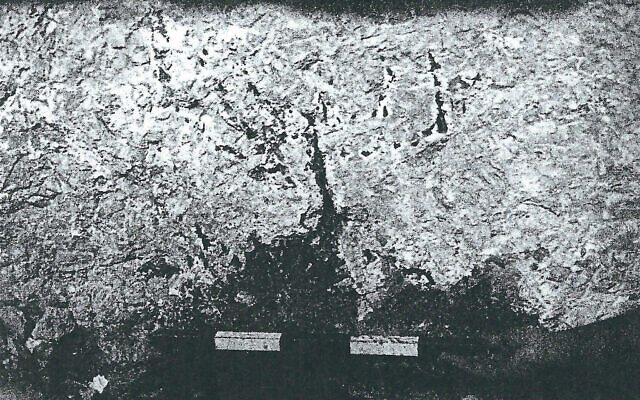 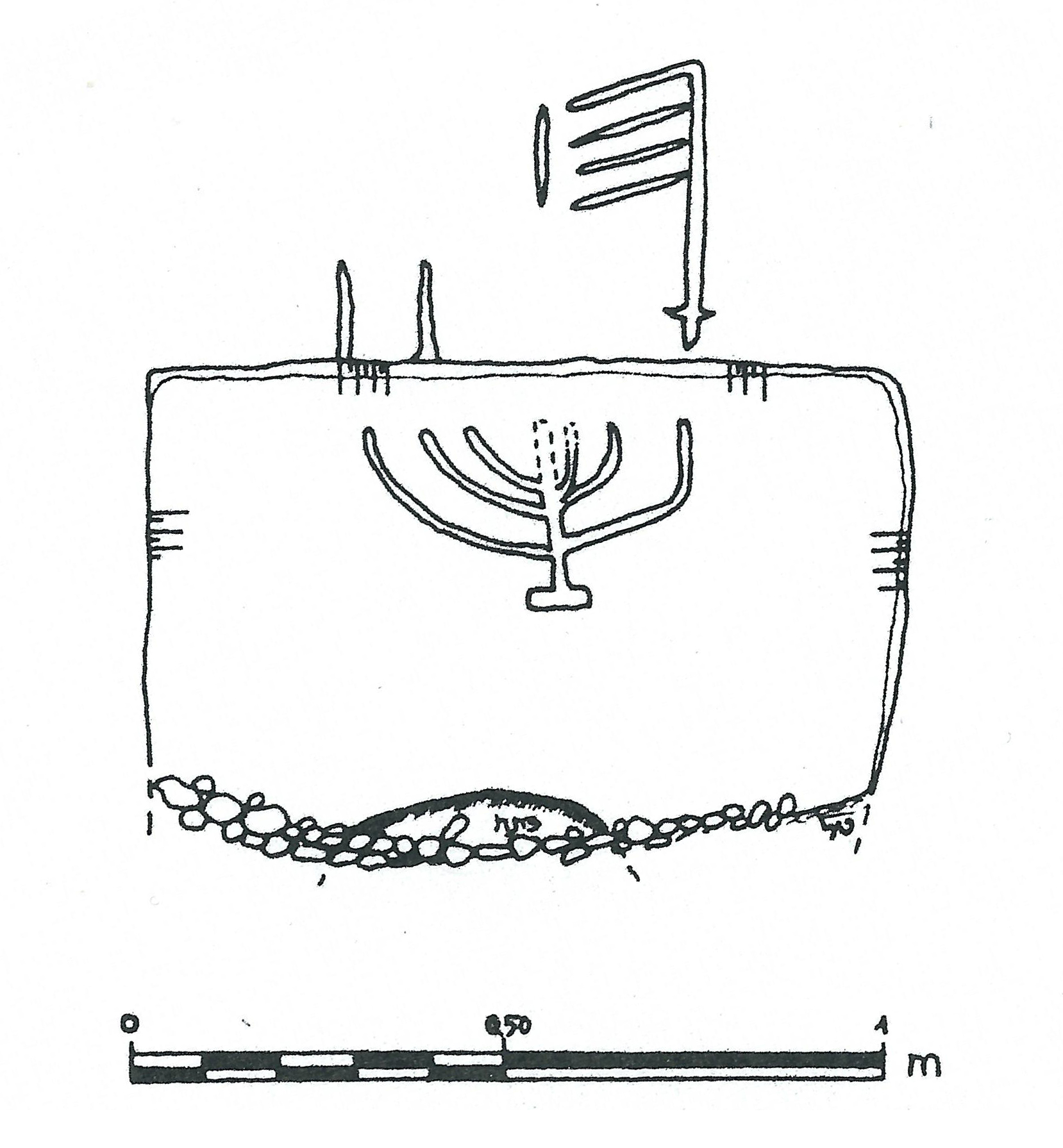 1980s drawing of the façade of the menorah found in a tomb at Mukhmas. (from the archive of the Unit of the Staff Officer for Archaeology in Judea and Samaria)

The physical evidence of this previously unpublished menorah drawing may have already disappeared. Raviv told The Times of Israel that based on the precise coordinates recorded by the excavators in the 1980s, he attempted to locate the burial cave where the menorah was found. After an exhaustive search, he and his partner did not succeed. 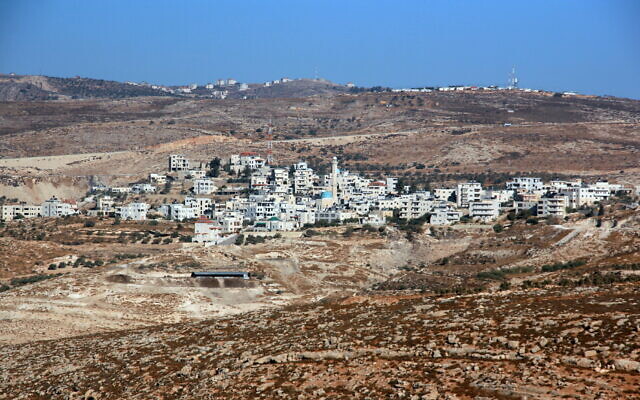 “We got to the place just outside the modern village of Mukhmas and didn’t find it. It’s possible it doesn’t exist anymore. There has been lots of development, there’s a lot of industry there today. It’s hard to believe it did survive, but maybe it’s just covered,” said Raviv.

According to photographic evidence from the 1980s, what appears to be an unusual paleo-Hebrew letter — either a heh or a chet — was etched above the engraved menorah. The early Hebrew font was not in general use during the Second Temple period.

The font was used by Jewish rebels as a nationalist return to Israelite roots on coins and in messages and “it may indicate the tomb’s owners were associated with the small groups that continued to use the script during the Second Temple period, probably kohanim,” Raviv writes. 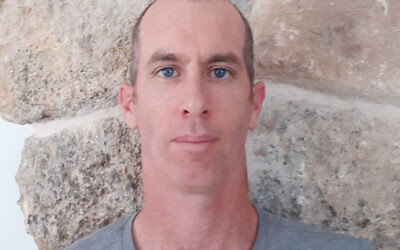 This newly rediscovered menorah and mysterious letter join another 1980s find of a hideaway cave, in the nearby el-’Aliliyat region. There, archaeologists discovered a mikveh (ritual bath), a cistern, and two menorahs drawn with a charcoaled stick, one crowned by an Aramaic/Hebrew inscription.

This cave system, in the el-’Aliliyat region, was recently visited by Raviv and scientists from the Israel Cave Research Centre.

The inscription found in the second cave system, too, could point to a priestly connection — or not, said Raviv.

An Aramaic/Hebrew inscription above a Byzantine-era cross and Second Temple-era menorah drawn in a cistern in the al-Aliliyat cliffs near modern Kfar Mukhmas. (Boaz Langford)

Written in typical Hebrew lettering, it states, “Yoʿezer itʿaqar ʿalu matran[a]“, which can be deciphered in two different readings. The reading of Hebrew University archaeologist Prof. Joseph Patrich, who discovered the inscription, gave a nod to Roman forces: based on its Aramaic root, Patrich translated the Aramaic word “matrana” into the Hebrew mishmarot, and interpreted the inscription as: “Joezer was uprooted, the guards (mishmarot) entered.”

However, others read the word mishmarot as the shifts of priestly service in the Temple, a use found throughout later Jewish sources.

According to Raviv, “An analysis of the word mishmar/ot in talmudic texts reveals that, in Tannaitic sources (Mishnah and Tosefta), it always designates the priestly divisions, whereas the meaning of roadblocks or military units is added in Amoraic texts… The inscription matarna in the el-’Aliliyat caves should be understood in the older meaning — priestly divisions.”

Taken together with the ritual bath, the menorah drawings and the fact that the name Jo’ezer (“God is the Help”) is connected to priestly families, even without the clear identification of the inscription there are strong indications that the cave system was prepared and used by the priestly class, said Raviv. The ritual bath, which would have taken great resources and time to prepare, is a sign that ritual purity was strictly observed. 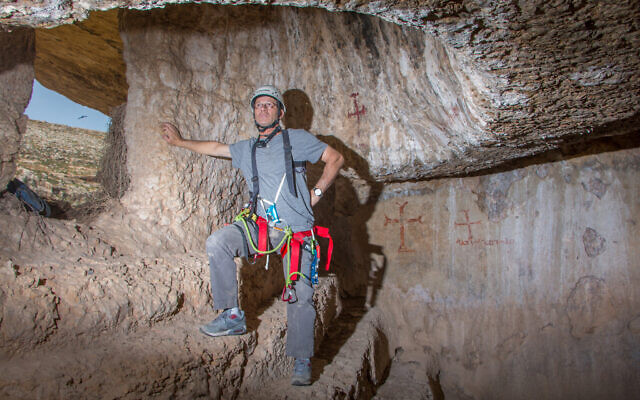 “The discovery of the graffiti of seven-branched menorahs in the el-‘Aliliyat caves and in Kafr Mukhmas supports the idea that the decorative use of the menorah during the Second Temple period until the Bar-Kokhba revolt was associated with the Temple and a priestly population. Both the archaeological finds in Michmas discussed here and references to the settlement in literary sources indicate the village’s link to the Temple,” he writes.

The three Michmas menorah drawings are all likely dated to a period from circa 150 BCE to 136 CE and join only a handful of other seven-branched menorah representations from the Second Temple period.

Other contemporary menorahs include the Arch of Titus depiction in Rome, and the Magdala Stone, located near Tiberias, which dates to prior to the Temple’s fall. In Jerusalem, sites of menorah drawings include a burial chamber called Jason’s Tomb and pieces of plaster uncovered in the Jewish Quarter. The menorah also appears on coins minted by Mattathias Antigonus, who died in 37 BCE.

“Due to the difficulty in determining the exact date of the [Michmas] menorah’s graffito and the scarcity of explicit references to priests in Michmas during the Second Temple period, it is possible that a group reached the site only after the destruction of the Temple and lived there during the period between the revolts,” said Raviv in the press release.

The symbol of the menorah was later adopted in funerary art to represent resurrection, especially during the Byzantine era. But until the Bar-Kochba revolt of 132 CE, it was largely used to denote the priestly class. 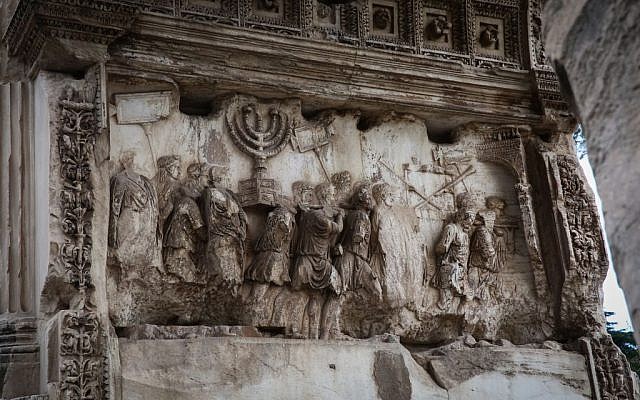 A depiction of Jewish captives and the gold menorah taken from Jerusalem following the destruction of the city in 70 CE, seen on the Arch of Titus, in Rome, Italy, October 20, 2016. (Yossi Zamir/Flash90)

Tip of the menorah?

According to textual sources including the Mishnah, there are two other sites that may have been priestly villages, writes Raviv: Beit Hakerem (today’s Ein Kerem), which provided stones for the altar, and Beit Rima, which may have produced wine for libations.

“It’s very difficult to put a finger on the priestly settlements of the Second Temple period,” said Raviv. 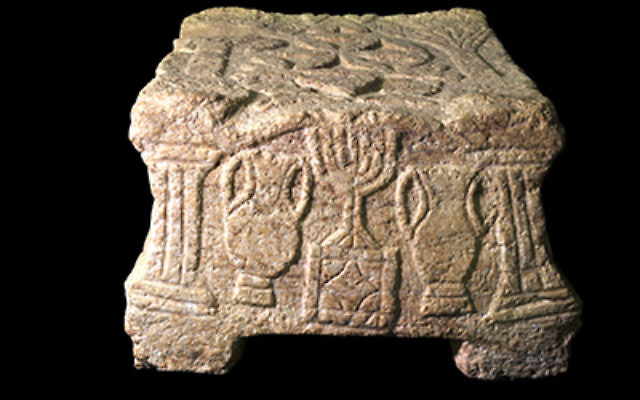 The Magdala Stone bears one of the earliest images of the seven-branched menorah from the Jewish Temple in Jerusalem. (Yael Yulowich, courtesy Israel Antiquities Authority)

Raviv said that while there is later archaeological evidence, including an inscription uncovered in 1962 Caesarea excavations, which lists villages that were populated by priests after the fall of the Second Temple, earlier evidence is elusive.

However, if, by using the textual sources and archaeological evidence, researchers are able to shore up the location of Michmas as a priestly settlement, “then we can also talk about other locations such as Beit Hakerem and Beit Rima. Maybe Tekoa is another such village,” he wondered.