But the officials, who spoke to Channel 12 on condition of anonymity, also expressed skepticism on the prospect of a budget deal, accusing Prime Minister Benjamin Netanyahu of using the political crisis to dissolve the government and call early elections.

There has been increasing rhetoric from Blue and White lawmakers — led by Gantz himself — indicating that the current unity government is coming to an end over the budget issue and cabinet squabbling that has hampered governance.

If no budget is passed by late December the government will automatically dissolve. Netanyahu is widely believed to be stalling on the budget in order to call snap elections and avoid an agreed-upon handover of power next year to Gantz, the Blue and White party leader and alternate prime minister. Israel held three rounds of consecutive elections between April 2019 and March 2020.

Likud, however, said the disagreements with Blue and White go beyond the budget, such as on legal matters, according to the network. 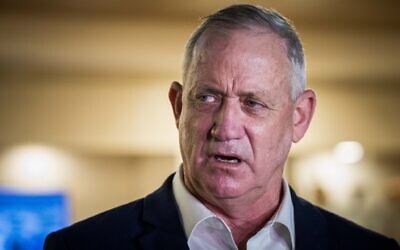 Senior members of the Blue and White party last week threatening to splinter off and form an opposition faction if Gantz gives in to Netanyahu in their dispute over the state budget. One of the members of the potential breakaway group told Zman Yisrael, The Times of Israel’s sister site in Hebrew, that every day the unity government continues is “a disaster.”

“This government needs to be dismantled,” the official, speaking on condition of anonymity, told Zman. “It is a harmful government, the worst in the history of the country. Every additional day is a disaster.”

Some in Blue and White are pushing for the entire party to not wait any further and want to immediately disband the Knesset and call new elections. That hardline camp includes Foreign Minister Gabi Ashkenazi, Justice Minister Avi Nissenkorn and MKs Assaf Zamir and Miki Haimovich, among others, although they are not fully decided on the matter.

Opposition leader Yair Lapid said Friday he would be willing to once again join up with his erstwhile political partner Gantz — if the Blue and White leader agrees to give him the alliance’s top spot.

As the dysfunctional unity coalition between Gantz and Netanyahu appeared to barrel toward its ignominious end mere months after its establishment, Lapid told Channel 12 he was willing to do “whatever’s necessary to replace this government.” 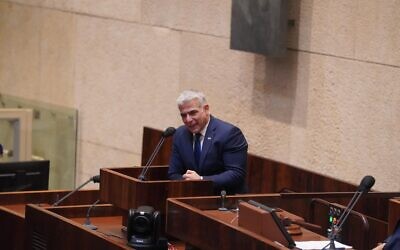 The Knesset last passed a state budget in March 2018. Israel has limped through 2020 without a state budget, even though the coalition agreement signed by Blue and White and Likud in April agreed that a two-year 2020-2021 budget would be passed in the summer.

To prevent either side from bringing down the government, the power-sharing deal stipulates that if one side triggers a coalition collapse, the other automatically receives the premiership for the three months leading up to an election as well as the transition period in its wake.

But one of the few loopholes in that deal says the failsafe does not occur if the sides fail to pass a budget, leading to early elections.

Netanyahu has demanded a single-year budget, in contravention of the deal, citing the uncertainty caused by the coronavirus pandemic. Blue and White suspects he wants to leave himself a window to bring down the government during 2021 budget talks next year.

The initial budget deadline had been in August, with a failure to pass the 2020-2021 budget by then requiring the Knesset to dissolve. But Likud and Blue and White agreed to a last-minute compromise that gave the parties until December 23.