The two will remain at the hospitals for the next 24 hours so doctors can closely monitor them.

The vaccine, named Brilife vaccine, was developed by the Israel Institute for Biological Research. 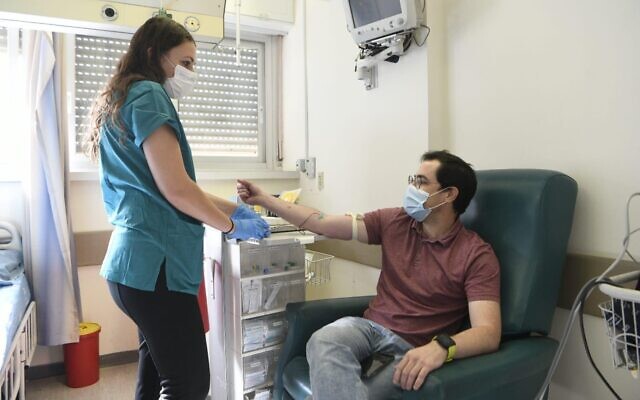 “The true exit from the coronavirus crisis is the development of vaccines and therefore this is a very important day,” Netanyahu said.

He said Israel was also working with pharmaceutical firms and other countries to import doses of a coronavirus vaccine, once one is approved for general use.

“What’s important is that by one means or another… we’ll bring enough vaccines for all Israeli citizens and then finally, with the help of God, we can be liberated from the pandemic,” the premier declared.

Netanyahu cautioned there would not be a vaccine available immediately, but said he could see “a light at the end of the tunnel.” 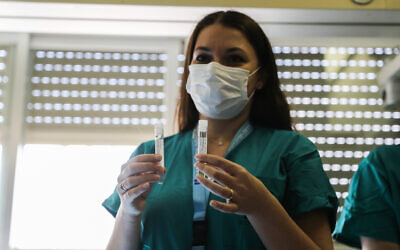 A nurse holds the Israeli-developed coronavirus vaccine at the Hadassah Ein Karem hospital in Jerusalem on November 1, 2020 (Yonatan Sindel/Flash90)

The premier also confirmed reports earlier in the year that he supported a Health Ministry initiative to set up a new vaccine manufacturing plant in Israel.

Gantz expressed cautious optimism, but noted the lengthy approval process for the vaccine. He therefore called on Israelis to continue adhering to Health Ministry guidelines.

He also repeated his call for the swift passage of a state budget covering 2021, which is at the centre of coalition infighting between his Blue and White party and Netanyahu’s Likud, saying that each additional day without a budget was putting an “unjustified economic burden” on the country.

Before Harel was injected with the virus, Gantz said the volunteer said to him: “Help us. I came here to tell you to help us economically. I’ve had three jobs in recent months before receiving the vaccine.” 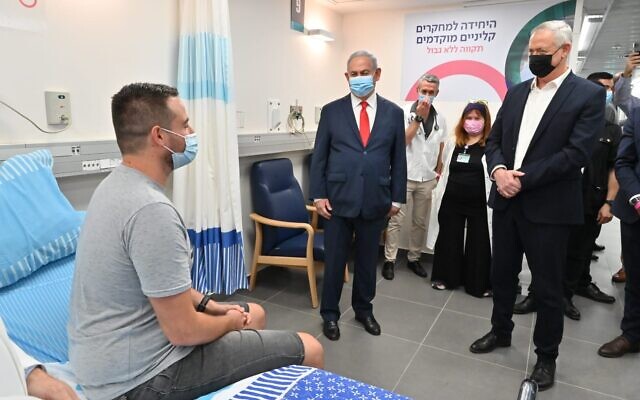 Speaking after Gantz, Edelstein said the Health Ministry was “turning over every stone” to acquire a vaccine.

“I really hope that we’ll soon hear about a breakthrough,” he said.

On Tuesday, the second group of volunteers will arrive at two hospitals to receive the vaccine. One in four of them will receive a placebo.

The first phase of the clinical trial is expected to last roughly a month and will involve some 80 volunteers ages 18 to 55.

The second phase in December will test roughly 1,000 volunteers ages 18 to 85 at eight hospitals around the country. In this phase, volunteers with preexisting conditions will be allowed to participate.

If that larger group responds well to the vaccine and antibodies are detected in their blood, injections will then be given to some 30,000 people in April or May 2021. If the vaccine works well and there are no significant side effects, it will then be approved for full use in the general population. 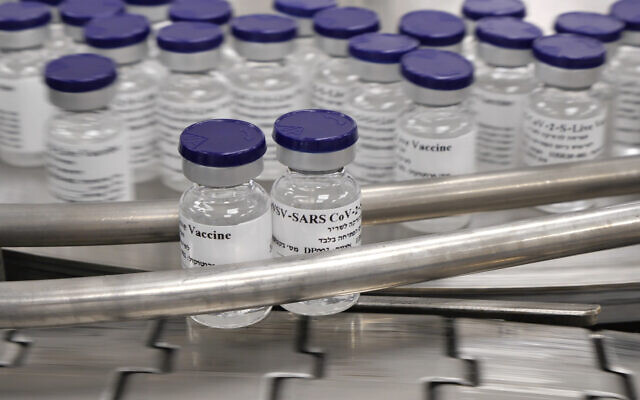 Vials of a potential coronavirus vaccine are seen on an assembly line in a photograph released by the Israel Institute for Biological Research on October 25, 2020. (Defence Ministry)

Last Monday, the Defence Ministry announced that Israel had begun mass-producing the potential coronavirus vaccine and plans to distribute it to both Israelis and Palestinians if it is approved for use.

The director of the state-run Israel Institute for Biological Research, Shmuel Shapira, said it will produce 15 million doses in the first stage and estimated the shot could be ready by July.

Israel is producing a domestic vaccine as a backup plan while it also conducts negotiations with pharmaceutical firms further ahead in the development process to receive doses when they become available. It has also been in contact with Russia and reportedly China to possibly use their vaccines if they prove effective.

The Defence Ministry has so far produced 25,000 doses for the first and second phases of the human trials. The vaccine was first tested on small animals — mice, hamsters and rabbits — and then on pigs.

The vaccine is named Brilife, a portmanteau of the Hebrew word for health — bri’ut — and life. The name also contains the abbreviation for Israel, IL, as well as the letters that make up the initialism of the laboratory, IIBR.