Opposition Leader Yair Lapid on Monday said he would submit a bill next week to dissolve the Knesset and hold new general elections, amid coalition infighting over the passage of the next budget.

“Next Wednesday, Yesh Atid-Telem will present a proposal to dissolve the Knesset. Wednesday, not two weeks, not a month, not another 45 days,” Lapid said in a speech to the Knesset plenum.

He took a swipe at his former allies in the coalition’s Blue and White party, who have threatened that the government could disband if a budget is not approved soon.

“I have no doubt of course that this time Blue and White members will honour their word,” he said sarcastically. 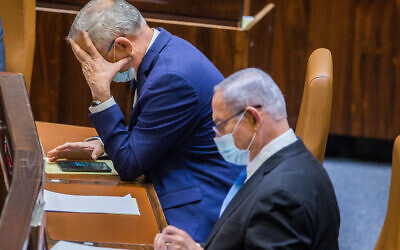 Alternate Prime Minister and Minister of Defence Benny Gantz, and Prime Minister Benjamin Netanyahu, seen during a vote at the Knesset on August 24, 2020. (Oren Ben Hakoon/POOL)

Under the coalition deal between the parties, Likud and Blue and White agreed to pass a budget running through 2021. Netanyahu, however, is now insisting on separate budgets for 2020 and 2021, with a failure to pass a budget allowing him to avoid handing over the premiership to Gantz, as he is required to do under their power-sharing deal.

While Likud has insisted that the failure to pass the budget stems from professional difficulties and lack of cooperation from Blue and White, a top ally of Netanyahu’s in the party acknowledged last week that there were political considerations behind the foot-dragging.

Despite Blue and White’s threats, the party appeared unlikely to back Lapid’s proposal, as by doing so, Gantz would forfeit his chance of becoming prime minister in the rotation agreement with Netanyahu. The chances Likud would support the motion also seemed slim, as Netanyahu would have to hand the reins to Gantz if his party were responsible for dissolving the Knesset.

Also Monday, the Knesset voted down a no-confidence motion that would have seen Netanyahu replaced as prime minister by Lapid.

Members of the right-wing Yamina party stayed away from the vote, after taking flack from Likud for backing a similar measure earlier this month.

Yamina MKs also did not vote on a proposal to replace Netanyahu as prime minister with party chief Naftali Bennett, which likewise was rejected. 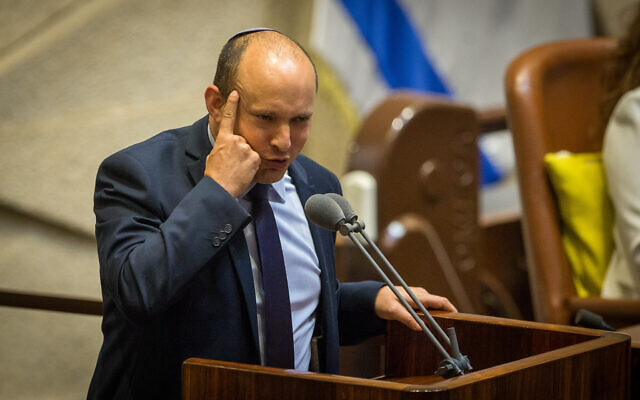 Following the vote earlier this month, Yamina rejected Likud’s criticism, saying Bennett and MK Matan Kahana were voting to topple the government, not to back Lapid.

Bennett’s Yamina opposition party has been surging in the polls amid widespread criticism of Netanyahu’s handling of the COVID-19 crisis,

A pair of polls last week forecast it would become the second largest party after Likud if new elections were held, catapulting from its current tally of five seats to 21-24. Likud, meanwhile, was predicted to slump to 27 seats, down from 36 in the current Knesset.

On Saturday, Yamina said it seeks to replace Netanyahu with Bennett, marking a major challenge on the political spectrum to the right of the Likud.

Bennett has long had a contentious relationship with Netanyahu but was a part of the prime minister’s right-wing religious bloc until Yamina was left out of the new government when it was formed in May.

In a first, a poll released Monday indicated more Israelis would like to see Bennett as prime minister over Netanyahu.

According to the Channel 12 poll — which is hypothetical since Israel does not have direct elections — if Bennett were to run against Netanyahu and the two of them were the only options, Bennett would get 31.4% of the votes, while Netanyahu would get 28.6%.

Another 35% say they would not vote for either of the two right-wing leaders.

Read more
PrevPreviousDaughter Of Lebanese President Says Open To Peace With Israel, Under Conditions
NextFinance And Health Ministers At Loggerheads Over Reopening Of StoresNext