The United Arab Emirates said Tuesday it wished to facilitate the reciprocal opening of embassies in Tel Aviv and Abu Dhabi “as soon as possible,” Israel’s Foreign Ministry said, as a senior Emirati delegation made a landmark visit to the Jewish state.

The Foreign Ministry said the UAE delegation — headed by the ministers of the economy and finance– had handed Foreign Minister Gabi Ashkenazi a letter from his Emirati counterpart, Abdullah bin Zayed al-Nahyan, during a working lunch.

The two leaders met in Berlin earlier this month in the first public high-level bilateral meeting between the countries.

In the letter — said to have been written in Hebrew — Bin Zayed reportedly also thanked Ashkenazi for his hard work advancing ties.

“I have full trust in your unequivocal support for opening the diplomatic missions in Tel Aviv and Abu Dhabi as soon as possible,” he wrote. “Best wishes for the two countries and the two friendly nations to enjoy progress and prosperity down the road.”

Israel has handed the UAE a letter expressing the hope to open an embassy soon in Abu Dhabi, on September 25, ten days after the two countries signed the Abraham Accords in Washington.

Speaking to Emirati journalists who made the trip on Tuesday, Ashkenazi told them that Israel appreciates the “courageous step taken by Abu Dhabi toward peace and leading the entire region toward a better future,” according to a separate statement from the Foreign Ministry.

“The relations between our countries are an important and significant step on the way to turning the Middle East from a region of conflict to a region of hope, prosperity, stability and peace,” he added.

Ashkenazi was later expected to present before the delegation a space technology and innovation exhibition, together with Economy Minister Amir Peretz and Science Minister Izhar Shay. 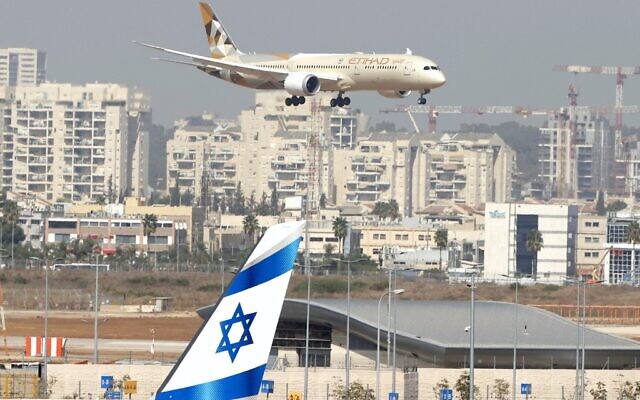 An Etihad Airways plane carrying a delegation from the United Arab Emirates (UAE) on a first official visit, lands at at Israel’s Ben Gurion Airport near Tel Aviv, on October 20, 2020. (JACK GUEZ / AFP)

“The Etihad plane at Ben Gurion Airport and the agreements signed today with UAE ministers are the dawning of a new era of peace in the Middle East,” he wrote on Twitter. “Inshallah more will follow and we will live in peace and cooperation with all our neighbors. Welcome to Israel!”

During the welcoming ceremony at Ben Gurion Airport, the United States, Israel and the UAE also announced the creation of a trilateral fund seeking to foster regional cooperation and prosperity. The $3 billion Abraham Fund will be based in Jerusalem.

“Today we are making history,” Prime Minister Benjamin Netanyahu declared minutes after the Etihad plane landed in Tel Aviv. “The enthusiasm for this peace agreement among our people is enormous. It’s real, it’s broad, it’s deep, and it reflects the potential that is realised today.”

Netanyahu listed the four agreements Jerusalem and Abu Dhabi had agreed to sign — including on aviation and taxation — vowing that they will bring many benefits to the people of both countries, including regular direct flights.

“The visit of such a high-level delegation from the UAE, and the agreements we are about to sign, will show our peoples, the region and the entire world the benefit of having friendly, peaceful, normal exchanges,” he said. “I believe that more and more governments across the Middle East understand, as we do here today, that we’re so much better off working together, as friends.” 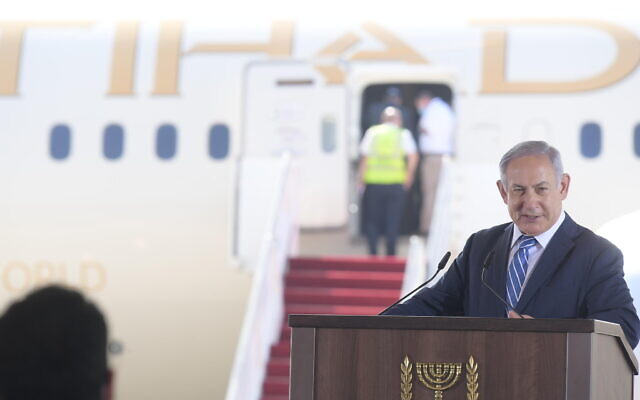 This visa exemption treaty, which needs to be ratified by both countries before coming into force, is Israel’s first such agreement with an Arab country.

“We’re exempting our nationals from visas. This will offer a huge boost for business, for tourism, for people-to-people contacts,” Netanyahu said.

In addition to the visa waiver, bilateral agreements in the areas of aviation, investment protection, science and technology were signed.

On Monday, Etihad Airways Flight EY9607 — lauded as the first commercial shuttle from the UAE to Israel — landed at Ben-Gurion. That flight came a day after the two nations agreed to enable 28 weekly direct flights between their territories. The flight arrived without passengers but later ferried an Israeli travel and tourism delegation to Abu Dhabi.

On Thursday, the Knesset approved Israel’s normalisation deal with the UAE by an overwhelming majority, all but ensuring that it will be ratified in the near future.