Eitan Haber, a former journalist and the closest political aide to slain prime minister Yitzhak Rabin, died Wednesday afternoon at the age of 80 after battling a serious illness for three years.

Haber was the official who famously issued a tearful announcement of Rabin’s death by assassination on the night of November 4, 1995.

Haber, who first met Rabin when working as a journalist in the Israel Defense Forces, was a regular columnist for the Hebrew daily Yedioth Ahronoth.

In 1985, he was appointed Rabin’s communications adviser when Rabin served as defense minister in the Likud and Labor unity government. Haber stepped down with Rabin in 1990, and returned to be his bureau chief after the Labor election victory in the 1992 election. 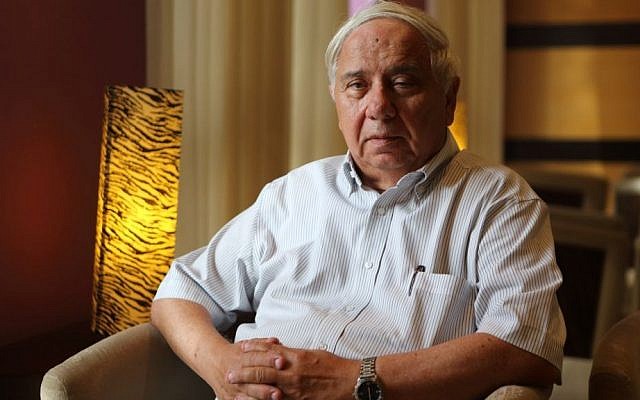 Haber was known as a master communicator and wrote many of Rabin’s most memorable speeches, including, notably, his “Soldier of Peace” speech delivered to the US Congress in 1994.

Rabin, who together with Shimon Peres and Yasser Arafat, received the 1994 Nobel Peace Prize, was assassinated by right-wing extremist Yigal Amir on November 4, 1995, at the end of a peace rally in Tel Aviv. Haber was tasked with making the government’s official announcement of Rabin’s death that night.

“The government of Israel announces in dismay, in great sadness, and in deep sorrow, the death of prime minister and minister of defense Yitzhak Rabin, who was murdered by an assassin, tonight in Tel Aviv,” Haber said, in anguished but firm tones, as he emerged from Ichilov Hospital in Tel Aviv.

At Rabin’s funeral, Haber read from the blood-covered page carrying the words of the “Song of Peace” that the assassinated leader sang at the peace rally and still carried in his pocket when he was shot. 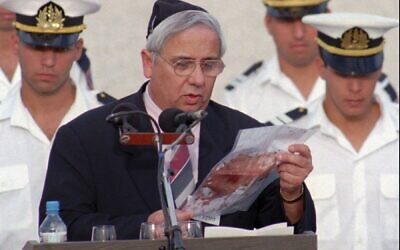 Eitan Haber, former Prime Minister Yitzhak Rabin’s aide, reads from the blood covered “Song of Peace” that the assassinated leader sang at the peace march and still carried in his pocket when he was slain, at the funeral ceremony in Jerusalem, Monday Nov.6, 1995. (AP Photo/Nati Harnik)

Eulogising Haber, President Reuven Rivlin described the former journalist as a “knight of the written and precise word.”

“He turned history into words and gave significant moments exemplary descriptions that shaped national memory,” the president said, adding that Haber stood “for the state and for the principles on which it was established.”

Prime Minister Benjamin Netanyahu described Haber as “one of the pillars of Israeli journalism,” saying in a statement that “the security of Israel was always at the forefront of his mind, and he wrote about it clearly, originally and in a fascinating way.”

Referring to Haber’s announcement of Rabin’s assassination, Netanyahu said, “We will never forget his emotional and dramatic statement on the shocking murder.”

Netanyahu also praised Haber’s efforts “that paved the way for the peace deal with Jordan.”

Opposition leader Yair Lapid said in a tweet that “the words of Eitan Haber will echo in the history books for eternity: ‘The Israeli government announces with dismay.’”

“Eitan dedicated his whole life to the fight for Israel’s image. He was a man of words and vision. Israel lost a dear man today,” Lapid wrote.

Haber is survived by two children.