Government-ordered restrictions on outbound flights as part of the national coronavirus lockdown are not being enforced by airport authorities due to legal difficulties with preventing passengers from boarding planes based just on the date they purchased the ticket, Channel 12 news reported.

Under tightened lockdown measures introduced on Friday, only those who bought flights before September 25 at 2 p.m., the date and time that the enhanced closure began, are permitted to board their planes.

However, the news report revealed that officials at Ben Gurion Airport have not been checking ticket purchase dates and airlines are continuing to encourage passengers to book flights.

Airlines are said to be telling their clients that if they are stopped at the airport the company will refund their tickets.

Aware of the situation, the so-called coronavirus cabinet of ministers charged with forming policy to counter the ongoing virus outbreak is working on new regulations to solve the issue by requiring all passengers who arrive at the airport to sign a declaration that they bought their tickets before the deadline, the report said.

The cabinet hopes to approve the regulations later Wednesday so that the measure can be immediately applied.

The Israel Airport Authority confirmed to Channel 12 that the restrictions are not currently being enforced.

“Following a suspension in the checks [of ticket purchase dates], we are preparing to continue performing checks according to the outline that will be approved by the coronavirus cabinet today,” the IAA said in a statement.

Ben Gurion Airport told the station that ticket inspections “will not be carried out until the matter is covered by regulations” but stressed that all other paperwork required of passengers, including documents demanded by the Health Ministry, is being checked.

One local flight operator, Israir Airlines, has challenged the government restrictions on outgoing flights in a petition filed at the High Court of Justice.

The company claimed that the primary purpose of restricting flights is to prevent the virus coming into the country and therefore there is no need to restrict outgoing flights. In addition, the company noted the difficulties in stopping those who also hold foreign passports from flying to counties where they have citizenship. 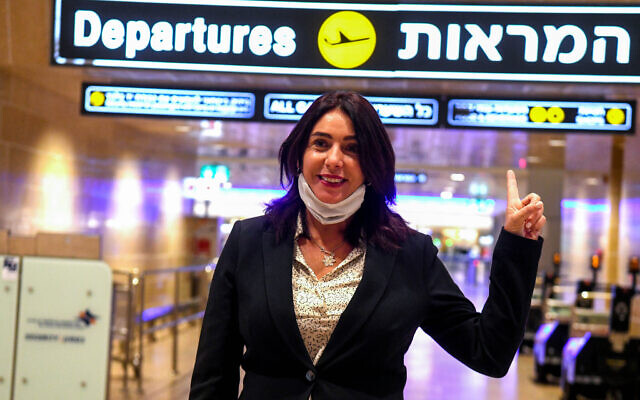 Hours before the new restrictions were to come into force, Transportation Minister Miri Regev announced the purchase date limitation and declared “the skies will remain partially open.”

She said Israelis would be able to return to the country “without limitations” but noted that a 14-day quarantine will continue to be imposed on people landing in Israel from “red countries” with high coronavirus rates.

Some 5,000 people took flights out of Israel last Thursday, Hebrew-language media reported, and a further 4,000 people landed on return flights.

Many of those standing in line at check-in counters said they had quickly purchased tickets once it became clear that the government was going to order the strict lockdown.

Those who spoke to media told largely the same story: If they are going to be stuck at home anyway, unable to see family or engage in recreation, then they may as well go abroad where they will be free to enjoy themselves.

A three-week lockdown, the second since the coronavirus pandemic began, started on September 18 and then further tightened last Friday as virus infection cases continued to climb rapidly. Government officials, including Prime Minister Benjamin Netanyahu, have already warned that the lockdown will likely be extended beyond its initial end date.

Netanyahu on Wednesday said it could take up to a year to lift all the restrictions.