After Years Of Bashing Israel At UN, UAE And Bahrain Dramatically Soften Tone

Old habits die hard. But sometimes they do die, and this year’s session of the United Nations General Assembly showed that, with strong political will and the right set of circumstances, it’s possible to kick even a deeply entrenched diplomatic convention.

For decades, the United Arab Emirates and Bahrain have used the UN stage to relentlessly bash Israel and champion the Palestinian cause. Even in recent years, every speech in Turtle Bay featured a condemnation of the Jewish state and the assertion that regional stability will remain elusive until the creation of a Palestinian state based on the 1967 lines.

In 2010, for instance, UAE Foreign Minister Abdullah Bin Zayed Al Nahyan dedicated a whopping 563 words to the Israeli-Palestinian conflict. His country believes peace between the two parties is “central and vital” to the entire region, he said.

“And this cannot be realised without ending the Israeli occupation of the Occupied Palestinian and other Arab Territories and its withdrawal to the line of 4 June 1967, including East Jerusalem, the Syrian Golan Heights and the remaining occupied territories in Southern Lebanon.”

Abu Dhabi stands by Palestinian Authority President Mahmoud Abbas and commends him for his efforts to restore the rights of his people, Al Nahyan went on.

“Our commitment to the achievement of peace as a strategic choice makes it imperative for us to condemn the Israeli practices committed against the Palestinian people, including the collective punishment policy and the inhumane blockade imposed on the Palestinian people in Gaza, and its flagrant violations to international law, principles and purposes of the UN Charter and international humanitarian law,” he declared.

“In this context, we emphasise that the continuation of Israeli settlements and confiscation and Judaisation of the occupied Palestinian and other Arab territories clashes with the pursuit of peace,” the minister went on. “Either choose to pursue peace or insist on continuing the settlements. Combining the two is incompatible with peace.”

He also called for an end to Israel’s “atrocious blockade” on Gaza and condemned the “Israeli aggression” against the Mavi Marmara, a ship that tried to break the naval blockade of Gaza. (Earlier that year, Israeli commandos had boarded the vessel and, coming under violent attack by Turkish activists armed with clubs and metal bars, killed 10 of them.)

That speech was delivered a long time ago. But even half a decade later, in 2015, the same Abdullah Bin Zayed — known as ABZ — told the General Assembly that the Palestinian issue “remains at the core of conflict in our region, and one of the main threats to its security and stability.”

The “feelings of injustice and frustration resulting from the continued Israeli occupation of the Palestinian territories and the flagrant human rights violations committed by the occupation forces, provide extremist groups with an opportunity to exploit these serious humanitarian conditions and to spread their radical thinking and incite frustrated youth to implement their destructive agenda,” he said at the time. 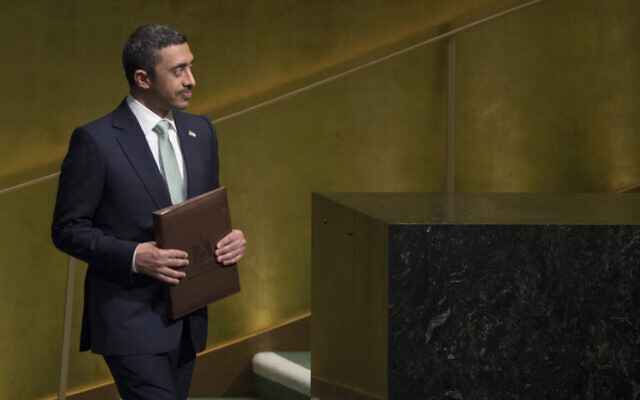 In last year’s speech, he declared once more that the Palestinian plight remains the “central issue” of the Arab world.

“Stability cannot be established in our region without reaching a just, lasting, and comprehensive solution that enables the Palestinian people to establish their independent state with Jerusalem as its capital,” he said at the 2019 General Assembly.

“The violations committed by the occupying power against the Palestinians, including the creation of new ‘facts on the ground’ in Jerusalem, will enable extremist groups to exploit the suffering of the Palestinian people.”

What a difference a year makes.

Israel is still an “occupying power” and no Palestinian state with Jerusalem as its capital has come into being, but ABZ sounded very different on Tuesday — exactly two weeks after he signed the Israel-UAE peace agreement at the White House — when he delivered his (pre-recorded) statement at the UN.

“The call for the establishment of an independent Palestinian state on the borders of 1967 with East Jerusalem as its capital, in line with the relevant international resolutions and the Arab and international consensus, will remain a firm demand,” he said.

“My country has made persistent efforts using all available diplomatic channels to affirm our total rejection of the annexation of Palestinian territory, and we have warned of its impact on all parties and on the security of the region.” 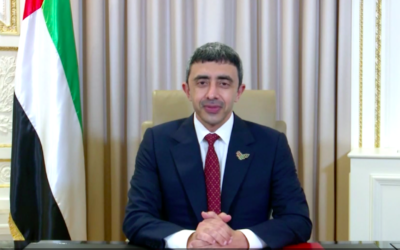 The “historic peace accord with Israel,” he continued, opened “broad prospects to achieve a comprehensive peace in the region. We hope this peace accord will provide the opportunity for the Palestinians and the Israelis to re-engage in negotiations to achieve peace.”

In other words: We’re still in favour of a two-state solution, in principle, but temporarily halting Israel’s plan to unilaterally annex parts of the West Bank is enough for us right now. No word on Israeli violations. No mention of any occupation. Condemning settlement expansions? Lamenting Palestinian suffering? Bewailing the Judaisation of occupied Arab lands? Not anymore.

‘Israel’s provocative acts enrage Muslims all over the world’

Bahrain, too, has changed its tune quite dramatically in light of the Abraham Accords.

“We look forward to a halt to the oppression of Palestinians, the lifting of the blockade on Gaza and an end to the building of settlements so as to provide an environment conducive to the success of these solutions,” then-foreign minister Khalid bin Ahmed Al Khalifa told the General Assembly in 2013.

He also expressed his “full support” of Abbas. “He is one of the best leaders ever produced by Palestine, and deserves our support in each step he undertakes toward the attainment of the desired peace.”

Four years later, Al Khalifa reiterated that the Palestinian questions tops Bahrain’s foreign policy priorities. The Israeli-Palestinian conflict, he said, is “an issue of territorial occupation that must end.”

“Rights confiscated must be returned to their owners and this precisely is what Israel, notwithstanding all its security concerns, should understand, for it will achieve peace for its people, and for itself, only when it abandons all forms of violence against Palestinians.” 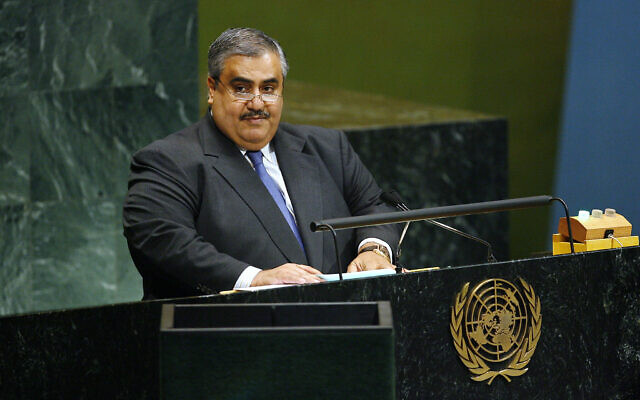 Jerusalem, he added, should halt its settlement activities and “stop violating the sanctity of religious sites, especially what is happening in [Jerusalem’s] al-Aqsa mosque in the form of repeated aggressions and provocative acts that enrage Muslims all over the world and impede the resumption of the peace process and all supporting regional and international initiatives.”

And at last year’s General Assembly, which took place after Bahrain hosted the rollout of the first part of the US administration’s two-pronged Mideast peace plan, Al Khalifa said the international community must force Israel “to stop its unjust annexation policies and violations of international law, which hinder all efforts aimed at reaching a just and sustainable solution to the Palestinian issue.”

On Wednesday, King Hamad bin Isa Al Khalifa, in his recorded speech to the UN,  called for “intensified efforts to end the Palestinian-Israeli conflict in accordance with the two-state solution” and urged the establishment of a Palestinian state on the 1967-lines with East Jerusalem as its capital.

But he refrained from any attacks on Israel. Rather, he hailed his country’s normalisation of ties with Israel as an “embodiment of our resolute approach to openness and coexistence with all.”