Israel To Enter 3-Week Lockdown From Friday; Schools, Malls, Hotels To Be Closed

With new infections running as high as 4,000 a day, Israeli ministers on Sunday approved a three-week nationwide lockdown over the upcoming Jewish holidays to contain the resurgent coronavirus outbreak.

The lockdown, bitterly opposed by many sectors of the workforce, and castigated by the opposition as proof of government failure, will take effect at 2 p.m. on Friday, hours before the start of Rosh Hashanah.

Speaking at a press conference, Prime Minister Benjamin Netanyahu said that under the restrictions, Israelis will be limited from traveling more than 500 meters from their home except for essential needs like food and medicine. Schools will be closed starting Friday, and businesses and public sector employers will face strict limitations that he did not specify.

Netanyahu acknowledged the “high price” for the public, and the economic pain, caused by the lockdown measures, but said there was no choice. Overall, he insisted the economy was doing better than other countries’, which he credited to Israel being among the first to lockdown in early spring and then to reopen its economy in May after the first lockdown. He presented a slide showing the decline in Israel’s GDP in the second quarter of 2020 as less steep than in countries including the United States and Germany, and promised financial compensation for those hurt in the new lockdown.

The premier repeated his analogy that managing the virus was like playing an “accordion,” with the government easing measures when cases go down and tightening them when infections rise, as other countries are doing — though aside from Israel, none has imposed a second full lockdown.

“The medical experts told me to close [the accordion] when the health system raises a red flag,” he said. “They’re warning us about the jump in the number of seriously [sick] patients and from the winter.” 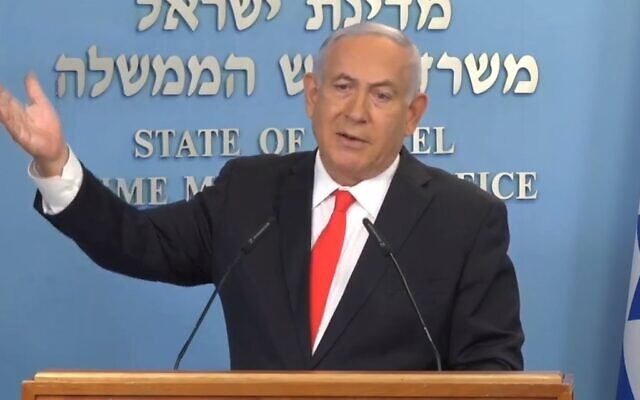 Ticking off the various restrictions, Netanyahu said there was an “outline” to allow prayers over the holidays and that gatherings in closed spaces would be capped at 10 people and those outdoors at 20.

“I know these steps have a high price for all of us and we can’t celebrate [the holidays] with the whole family,” he said.

He again implored Israelis to wear face masks and adhere to social-distancing guidelines, saying “we’ll beat the virus” if they do so.

“I see the vaccine on the way,” he said.

Taking questions, Netanyahu interrupted the first lengthy question, telling the reporter “this is not your speech,” after she said much of the public “feels there is no leader” and asked him who should be blamed for the failure.

“You say it’s a failure,” he said testily, repeating that “I just showed how we shut down early… reopened the economy early… and the fact is that there are achievements.”

Netanyahu blamed politics and “populism” for some of the difficulties in reducing the contagion, but rejected the notion that he had capitulated to his political allies.

Asked what the lockdown was buying time for, and again whether the government has failed, he said, “No, really not. We didn’t fail.”

“The problem isn’t the equipment — it is the capacity of the [medical] teams to keep working,” he said. “Some of them are falling off their feet.” 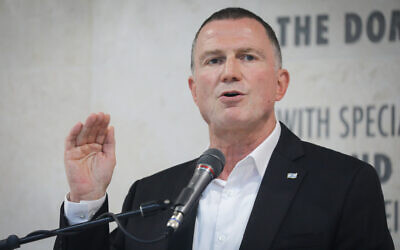 Addressing the press conference from quarantine at his home after exposure to a COVID-19 carrier, Health Minister Yuli Edelstein said the new rules bought him no satisfaction.

“For three months, I tried to avoid a lockdown. I did everything so that we could live alongside the coronavirus, with rules here and there,” he said. “Under the circumstances that were created, we had no choice.”

The health minister said that if Israelis do not adhere to the rules, “all of this will be for nothing.” But if the rules are kept, “there is a light at the end of the tunnel,” he said.

Edelstein vowed to improve the country’s much maligned contract tracing program for when the lockdown is lifted and said prayers on Rosh Hashanah and Yom Kippur would be “very limited,” without elaborating.

Coronavirus czar Ronni Gamzu said the high rate of positive coronavirus tests showed the virus was spreading widely and said the lockdown was “the lesser of two evils.”

He said he is “losing sleep” over the pandemic, and maintained that the government was forced to act after some hospitals warned of overload.

“Only the Israelis, only you, can defeat the coronavirus,” he said, urging everyone to keep the rules.

“If we do it wisely, we can finish this in two or three weeks,” he added, referring to the lockdown measures 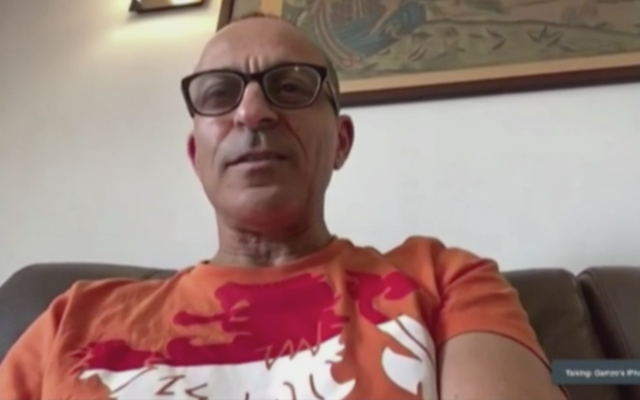 The press conference came shortly before Netanyahu left for the airport to fly to Washington to sign an agreement at a White House ceremony with the United Arab Emirates and Bahrain to normalize diplomatic ties.

During the cabinet meeting to vote on the lockdown, Netanyahu reportedly blew up at Labor Minister Itzhik Shmuli for opposing a lockdown and saying he instead backed measures that would place fewer restrictions on the economy and focusing on virus hotspots.

“What do you suggest? Tell me what you suggest! These are tough and unpopular decisions that need to be made. Be leaders. You don’t want us to do nothing,” Netanyahu was quoted saying in leaks from the meeting.

Likud Minister Ze’ev Elkin meanwhile went after Gamzu, who is leading the country’s response to the pandemic.

“You zigzagged all the time. From the traffic light [plan] two weeks ago, to the proposal of a full lockdown today. All the time the experts change their recommendation in an unsystematic manner and without clear parameters,” Elkin complained, according to Channel 12 news.

Despite reportedly chewing out Gamzu, the network said Elkin voted against the lockdown plan, as did Economy Minister Amir Peretz and Tourism Minister Asaf Zamir. Shmuli and Regional Cooperation Minister Ofir Akunis abstained, while all other ministers voted in favor. 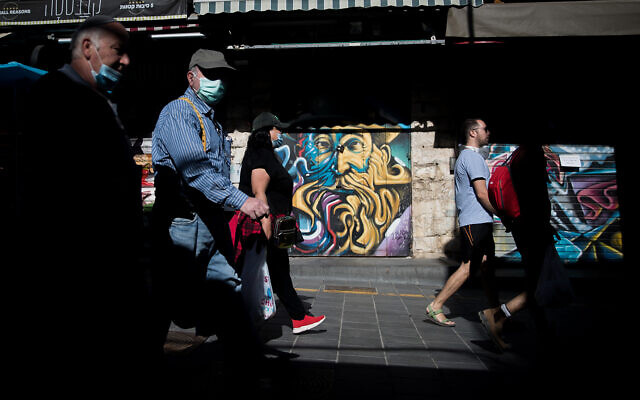 People walk past closed stores in the Mahane Yehuda market in Jerusalem, May 4, 2020. (Yonatan Sindel/ Flash90)

According to Hebrew media reports, the Finance Ministry projected the lockdown will result in a NIS 6.5 billion ($1.8 billion) loss to the economy. The previous lockdown in March and April plunged Israel into a recession.

With the country facing its second national lockdown and the government’s pandemic policies being widely perceived as inconsistent and at times random, many businesses have vowed in recent days to defy closure orders, saying they will not survive a new shutdown. Meanwhile, top business leaders warned Netanyahu on Friday that a new lockdown would be disastrous to the local economy.

The proposal is highly controversial with the public, with many business leaders threatening to defy it. Hotels are furious that they will be required to cancel reservations for the High Holidays just days in advance, having geared up staff and purchased quantities of supplies and food.

There are also complaints that the lockdown unjustifiably closes down the entire country rather than focusing on COVID-19 red zones, and allegations that it is politically impacted, with the government reluctant to be seen as singling out ultra-Orthodox areas, which, along with Arab areas, have some of Israel’s highest contagion rates. Netanyahu at his press conference denied that he was instituting the new measure after capitulating to ultra-Orthodox pressure, saying he was, as ever, taking the necessary steps for the good of the nation.

According to the latest Health Ministry figures, 1,108 Israelis have died from COVID-19 since the start of the pandemic, with a record 513 people in serious condition and 206 in moderate condition.

There were 2,715 new cases confirmed on Saturday; rates are typically depressed over the weekend. Newly confirmed cases of the coronavirus have been rising steadily, to a record high of some 4,000 per day at the end of last week.