Government To Back Airlift Of 2,000 Ethiopians To Israel By Year’s End

Tamano-Shata has been pressing the government to rescue as many people from the Jewish community as possible in light of reports that up to 14,000 Ethiopians waiting to immigrate to Israel are facing a coronavirus-related humanitarian disaster and must be brought to the Jewish state as soon as possible.

In November 2015, the government passed a decision to airlift “the last of the community” waiting in Addis Ababa and Gondar to Israel within five years.

Since that decision, however, just 2,257 Ethiopians have been brought, in dribs and drabs, according to Jewish Agency figures.

Severe malnutrition is rife in the community, and while there are no reported cases of COVID-19 among them yet, the disease is spreading rapidly in Etheopia, with more than 60,000 cases, nearly 950 deaths and around 1,500 new confirmed cases in the country every day.

On August 19, Tamano-Shata, of Blue and White, presented an NIS 1.3 billion ($382.6 million) framework to the Knesset aliyah committee to bring 8,000 Ethiopians to Israel and to close the camps in Gondar and Addis Ababa for good.

Reactions to the news that 2,000 would be airlifted were mixed.

The Struggle to Bring the Jews of Ethiopia, a group which unites activists and families fighting to bring their loved ones to Israel, and which has been campaigning intensively on social networks over recent weeks, said it was “a great night,” but promised to continue fighting to have the remaining thousands brought over too. 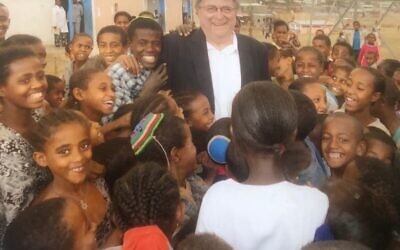 Joe Feit, Founder and chairman of the Struggle to Save Ethiopian Jewry, with friends. (Courtesy)

Joe Feit, chairman of the volunteer-run Struggle to Save Ethiopian Jewry, the only organization on the ground providing food and medical assistance to the communities in Addis Ababa and Gondar, told the Times of Israel: “The government’s action is neither adequate nor credible. It is inadequate because all the people satisfying the criteria set forth in the governments 2015 decision were supposed to be in Israel within five years of that decision, not just a fraction of them. The government’s new action is not credible since, given COVID restrictions, it seems highly unlikely that this action, like prior government decisions, will be implemented in a timely fashion and in accordance with its terms.“

Tamano-Shata posted on Facebook, “After tough negotiations with the Prime Minister’s Office and the Finance Ministry, with the full backing of my party leader Benny Gantz….we have succeeded! A final agreement has been reached with the Ministry of Finance that will bring 2,000 people to Israel [by] the end of 2020. I intend to meet the target, then complete bringing all of the remaining people who are waiting, which will lead to closure of the camps by the end of 2024.”

She added, “It is said, ‘whoever saves one life saves an entire world.’ For many families who live here in pain and for those who have been waiting for many years to immigrate to Israel and are now living in hunger, this is a lifeline.”

Families waiting to make aliyah in the Ethiopian capital, Addis Ababa — accounting for around a quarter of the entire number — have been waiting for more than 20 years, while the rest, in Gondar city, have been hanging on for 15 to 20 years.