Daily Virus Cases Surge To Nearly 4,000 As Cabinet Set To Meet On Lockdown

The Health Ministry on Thursday morning announced that nearly 4,000 coronavirus cases had been diagnosed in Israel the previous day, as ministers were expected to discuss possible new regulations at a cabinet meeting.

The ministry said 3,904 cases were diagnosed on Wednesday, taking the number of active cases in the country to 31,769.

The death toll stayed steady at 1,054 after 11 deaths were reported Wednesday.

The number of patients in serious condition was at 474, with 133 of them on ventilators. There are additionally 158 patients in a moderate condition. 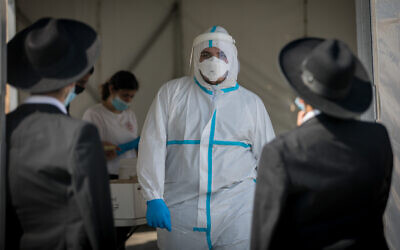 The ministry said there were 43,455 tests carried out on Wednesday with a positive rate of 9%, a figure that has remained consistently high over the past few days.

Top health officials on Wednesday night reportedly urged Prime Minister Benjamin Netanyahu to place the country under immediate lockdown to stem the spread of the coronavirus, ahead of a critical meeting Thursday of the so-called coronavirus cabinet.

Netanyahu was holding consultations on the pandemic and presented with various options, ranging from a full month-long lockdown on the entire country over the High Holidays, to a “breathing” closure in which schools and businesses would close for weeks but only movement between cities would be curtailed, to limited rules applying only to the holidays of Rosh Hashanah, Yom Kippur, and Sukkot.

A source present at the Wednesday meeting told the Walla news site that Health Minister Yuli Edelstein and ministry Director-General Chezy Levy both urged Netanyahu to impose significant restrictions as swiftly as possible, citing the strain on the healthcare system from the spiraling number of virus cases. 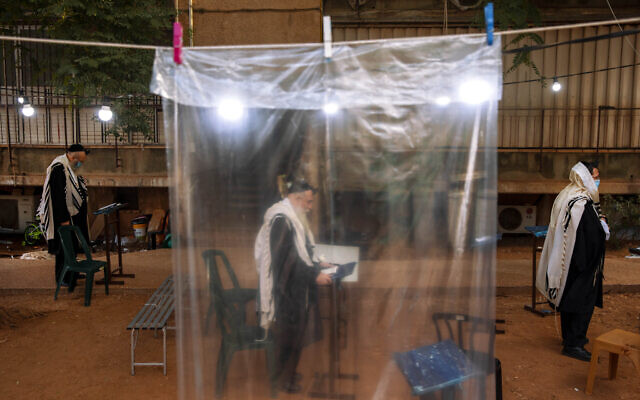 Ultra-Orthodox Jews keep social distancing and wearing face masks during prayer next to their houses as synagogues are limited to twenty people following the government’s measures to help stop the spread of the coronavirus, in Bnei Brak, Sept 8, 2020 (AP Photo/Oded Balilty)

According to the report, coronavirus czar Prof. Ronni Gamzu, who came into the post as a campaigner against broad lockdown measures, gave decision-makers a few options ranging from a heavy-handed lockdowns keeping people under lock and key, to just restricting movement between cities. The report said he agrees on the general need for tighter restrictions.

The most heavy-handed scenario could see Israelis prevented from venturing more than 500 meters from their homes except for essential needs for three weeks, with most businesses and schools closed. Other proposals raised at the meeting suggested closures on the holidays themselves, but not throughout the entire period, with restaurants and tourist sites permitted to remain open in low-infection areas and some curbs introduced in workplaces. The proposals will be discussed at Thursday’s cabinet meeting. 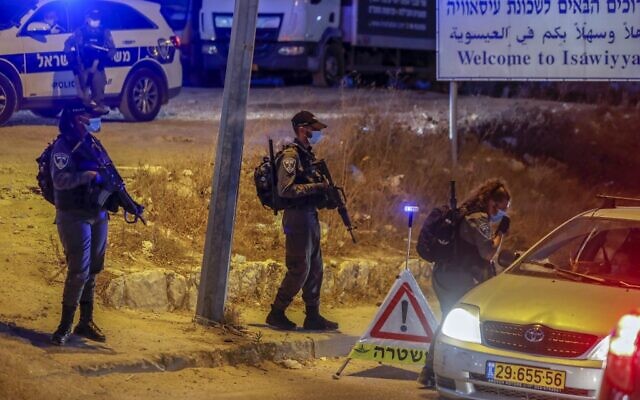 Israeli police at a checkpoint at the entrance of the East Jerusalem neighborhood of Issawiya, to enforce a COVID-19 lockdown on September 9, 2020. (AHMAD GHARABLI / AFP)

Edelstein and Levy told Netanyahu in the meeting that hospital officials have warned them that the situation is dire and could get worse without significant steps, according to Walla.

The high-level consultations came as virus cases skyrocketed, just days after the school year began and ahead of the holiday period beginning September 18. 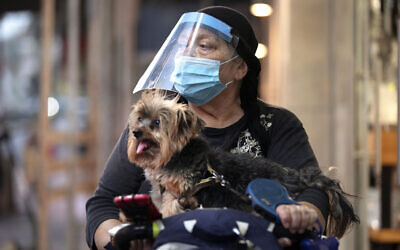 A woman wearing a face mask and shield amid the coronavirus pandemic, rides her mobility scooter with her dog, in Bnei Brak, Sept 8, 2020 (AP Photo/Oded Balilty)

Wednesday night saw the second overnight curfew in 40 towns and neighborhoods across the country, ordered by the government in an effort to slow the virus spread in areas with high infection rates. However, those measures largely went unenforced Tuesday and are seen by many as ineffective.

The nightly curfew is imposed between 7 p.m. and 5 a.m. the next day, in towns and neighborhoods with high infections rates.

Small businesses and self-employed workers earlier Wednesday threatened “anarchy,” saying that if the government decides to impose a complete lockdown on the economy, as expected in the coming weeks, they will keep their businesses open unless they are promised financial compensation in advance.

Read more
PrevPrevious1st Israeli In Major League Baseball Pitches A Victory In Debut
NextGovernment To Back Airlift Of 2,000 Ethiopians To Israel By Year’s EndNext