Twelve protesters were arrested Saturday night in Jerusalem as thousands returned to the streets of the capital for a weekly demonstration against the government and to call for the resignation of Prime Minister Benjamin Netanyahu.

Demonstrators held a wildcat march from the Chords Bridge at the city’s western entrance toward the city center for the third straight week, where they were attempting to meet up with thousands of other protesters at Paris Square, outside the Prime Minister’s Residence.

Several scuffles were reported as officers attempted to stop protesters from veering off-path or crossing barricades. Police said two officers were injured as protesters tried to bust through a police barrier.

The demonstrations, which have also focused on the government’s failure to handle the coronavirus crisis, have become a weekly flashpoint between protesters and police since they began to gain steam in June. 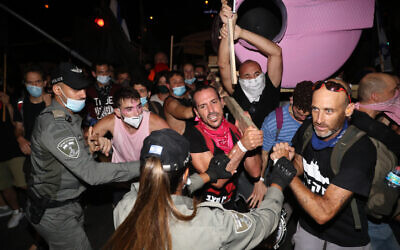 Israelis clash with police during a protest march against Israeli prime minister Benjamin Netanyahu in Jerusalem, on their way to PM Netanyahu’s official residence on Balfour St., September 5, 2020. (Yonatan Sindel/Flash90)

However, attendance at Saturday night’s protest was noticeably lower than in previous weeks, after hitting record highs last Saturday night. And while thousands returned to Paris Square for the 11th consecutive week, the demonstration was considerably more spaced out and relaxed.

Even the protest’s usual deafening noise was at a minimum, as demonstrators chatted amiably in the intersection where last week no one could be heard for drums, horns, and chanting.

The scorching weather — Jerusalem saw record highs this week — as well as the beginning of the school year may have contributed to the lower turnout.

“We got to Paris Square around 10, and we saw there wasn’t the same amount as last week, we can’t ignore that,” said Nitzan Ron, who coordinates volunteers for Peace Now. “But we still saw thousands of people show up, despite coronavirus and the end of the summer vacation.”

Ron said he was not concerned about the dip in attendance, but acknowledged that the protests could face an uphill battle as winter approached. 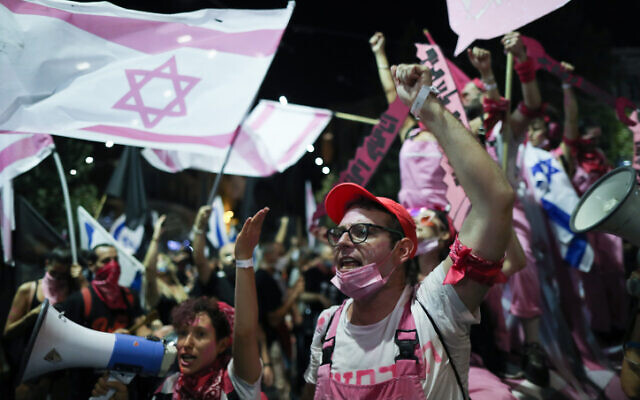 Israelis protest against Prime Minister Benjamin Netanyahu as they march on Jaffa Street in Jerusalem on September 5, 2020. (Yonatan Sindel/Flash90)

“The future of the protests is an open question. I hope it works out, that the demonstrations will continue. The real problem will be in the winter, because taking to the streets in the winter is tough,” Ron said.

Demonstrators, many dressed in costume, carried Israeli flags and signs calling for Netanyahu’s ouster over a series of corruption cases in which he is accused.

Protesters also carried giant pink and black submarines, in reference to a massive alleged procurement bribery scandal. Several of Netanyahu’s associates have been indicated in the so-called submarine affair, but the prime minister himself was never a suspect in the case. Police attempted at several points to seize the submarines, leading to more small fights.

“The protesters are not listening to police forces. Some of them are fighting with cops,” a police statement said.

Clashes were also reported between police and members of the Bratslav Hasidic sect, who have protested government attempts to limit their yearly pilgrimage to Uman, Ukraine, during the coronavirus pandemic. A video showed police and protesters fighting on King George Street in downtown Jerusalem, several blocks away from the main protest site.

Officers also arrested cartoonist and performance artist Zeev Engelmayer, who showed up in a naked female bodysuit as his character “Shoshka.”

Police said in a statement that they detained a man who showed up at the protest site “dressed as a naked woman, in a way that could constitute sexual harassment of the public.”

Engelmayer, in character, has been a fixture at previous protests, and it was not immediately clear why he was being detained. The prime minister’s wife, Sara Netanyahu, has complained in the past about feeling “sexually abused” by lewd posters and displays during the protests.

At a press conference following the protests, a spokesperson for the Israel Police denied ever having seen Engelmayer at the protests before.

Engelmayer, who was released later in the evening, alleged police officers forced him to strip so they could search him while he was being interrogated. The Israel Police did not immediately respond to a request for comment on the allegation. 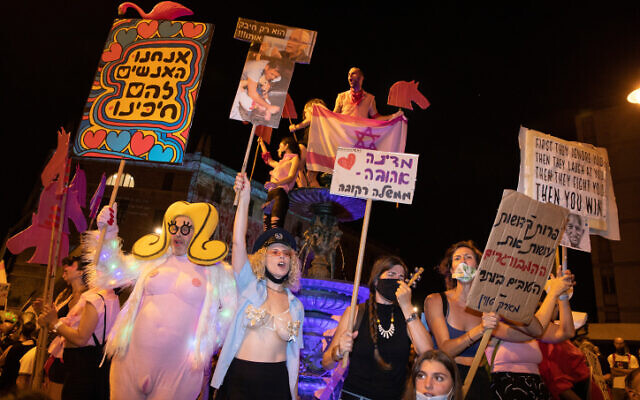 Shortly after midnight, police disperses all of the remaining protesters from Paris Square, pushing them onto the sidewalk and slowly forcing them down Agron Street.

Protests were also reported in Caesarea, where some 500 people gathered at a square outside the Netanyahus’ private home. People also gathered at some 300 overpasses around the country, according to the Ynet news site.

Protesters in Hadera reported that they found their car windows smashed after returning from an overpass.

Read more
PrevPrevious4 Israelis In Fortune’s ’40 Under 40′ List Of Influential Businesspeople
Next1.3 Million Israelis Locked Down As Curfew Kicks Off In 40 Virus HotspotsNext