1.3 Million Israelis Locked Down As Curfew Kicks Off In 40 Virus Hotspots

A curfew approved Tuesday evening by the cabinet went into effect at 7 p.m. in 40 towns and neighborhoods throughout the country, in the latest measure meant to help contain a coronavirus infection rate spiraling out of control in dozens of communities. (The list of areas under curfew is at the bottom of this article.)

The new rules, which will close schools and most businesses, will last for a week before being reconsidered by the cabinet.

The curfew, lasting from 7 p.m. to 5 a.m. the next day, targets nightlife activities, whether bars or traditional slichot prayer gatherings held in the evenings in Haredi towns ahead of the Rosh Hashanah holiday, which falls on September 18 this year.

Most of the municipalities affected are among the poorest in Israel, with Arab and Haredi towns making up much of the list. Some one million three hundred thousand Israelis were covered by the curfew, according to a Channel 12 tally.

The Health Ministry said Tuesday that 3,425 new coronavirus cases were confirmed over the previous day — the highest daily figure since the start of the pandemic, shattering a previous record set last week. Health officials say ultra-Orthodox and Arab locales have seen the most major outbreaks nationwide. 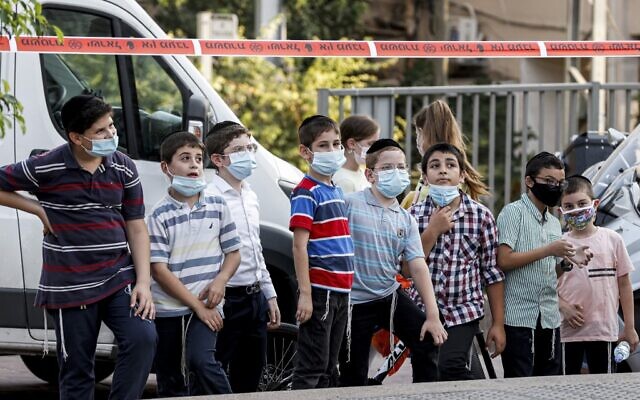 Children, mask-clad due to the COVID-19 pandemic, stand on a street in the ultra-Orthodox city of Bnei Brak on September 6, 2020. (Jack Guez/AFP)

“The rate of morbidity in the ‘red’ cities in Israel is among the highest in the world,” government coronavirus czar Prof. Ronni Gamzu said in comments aired on television as the curfew went into effect.

“Even the rates in ‘green’ cities [those with the lowest infection rates] are high. We must act to protect our people,” he urged.

Gamzu said he “understands the difficulty” with the new restrictions. “We’re taking steps that are complicated and difficult for many Israelis. It’s hard for me personally. I know there’s anger and frustration directed at me. I have to be loyal to my professional truth — I’ve never imposed such steps before, but with this rate of infection I have to recommend these steps to the government. You have my sincere apology, don’t be angry with me personally.”

He urged Israelis outside the “red” zones to also limit their movements out of solidarity.

“Any person who goes out tonight to a restaurant or event should think about that carefully,” he said. “Israel is one country. We’re trying to help the ‘red’ cities reduce morbidity. Please show some solidarity.” 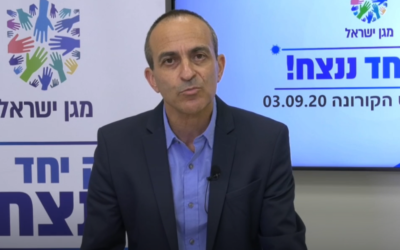 Some local leaders protested the inclusion of their municipalities in the list of cities requiring a curfew.

The mayor of Beitar Illit, a Haredi city of some 60,000 in the southern West Bank, said his community would not comply with the rules, accusing the government of discriminating against ultra-Orthodox cities like his own by applying sweeping curfews rather than singling out specific neighborhoods.

“We will not lend a hand to discrimination against the Haredi public,” the municipality said in a statement. “We cannot back measures that are not done transparently. Only the Haredi municipalities are under a full night curfew without any differentiation between neighborhoods.”

In Jerusalem, nine neighborhoods, all of them either Arab or ultra-Orthodox, are under curfew.

Jerusalem Mayor Moshe Lion said that his city would comply with the rules, but still spoke out against them, claiming that Health Ministry methods for assessing infection rates in the capital’s neighborhoods were either misguided or wrong. Lion said it was unfair that tens of thousands of of residents in some neighborhoods needed to be put under curfew because of a few hundred infected people. 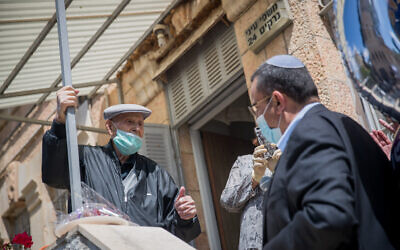 Jerusalem Mayor Moshe Lion, right, speaks with Shimon Eini as he celebrates his 100th birthday with neighbors and family outside his home in Jerusalem, as Israel celebrates it’s 72nd Independence Day under lockdown due to the coronavirus, April 29, 2020. (Yonatan Sindel/Flash90)

On a tour of Beit Shemesh, another virus-hit city that saw several neighborhoods placed under curfew, Prime Minister Benjamin Netanyahu urged Israelis to follow the rules on Tuesday.

“We have to do two things — wear masks and avoid gatherings. Irresponsible politicians who call on the public not to obey [restrictions] are leading to anarchy and to people dying,” he said, alluding to a Monday statement by Yisrael Beytenu leader Avigdor Liberman.

He said the current policy “is intended to slow the growth [of the infection rate], but it’s not certain that it will actually reduce it. We’re trying it out.”

Beit Shemesh Mayor Aliza Bloch told Netanyahu that “the closures don’t work and should be lifted. We have to strengthen local authorities by giving them more powers.”

Earlier plans for local round-the-clock lockdowns were scrapped abruptly on Sunday after heavy pressure on Netanyahu from the ultra-Orthodox community, including a letter from four Haredi mayors accusing the prime minister of “trampling” their communities and “turning us into disease vectors and enemies of the people.”

A list of activities permitted in the “red” zones under curfew was set out by Attorney General Avichai Mandelblit and published Tuesday by the Health Ministry. 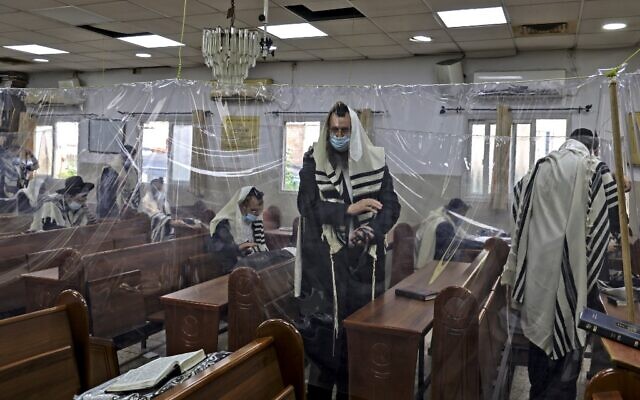 Ultra-Orthodox Jews praying in a synagogue divided with plastic sheets in Bnei Brak, near Tel Aviv, amid measures put in place to stem the spread of COVID-19, on September 7, 2020. (Menahem Kahana/AFP)

The rules stipulate that, during curfew hours, residents must keep within 500 meters of their homes and non-essential businesses must remain closed. Schools will be closed at all times, except for special needs programs.

Residents are allowed to leave their homes in these cases:

1. Going to work and returning from it, or transporting a person to and from work;

5. Taking part in a demonstration;

6. Participating in legal proceedings involving the person or in which they are required to take part;

7. Going to the Knesset;

9. Sports activities alone or with people living in the same household, up to 500 meters away from the house;

10. A brief stay or walk outside, alone or with people living in the same household, up to 500 meters away from the house;

12. Participating in a funeral, brit milah circumcision, prayer or wedding of a first-degree relative;

13. Providing medical assistance or other necessary assistance to a person in need;

14. Transferring a minor whose parents live apart from one parent to the other;

15. Transferring a minor whose parent needs to go for a vital activity and has no one else in the house to take care of them. 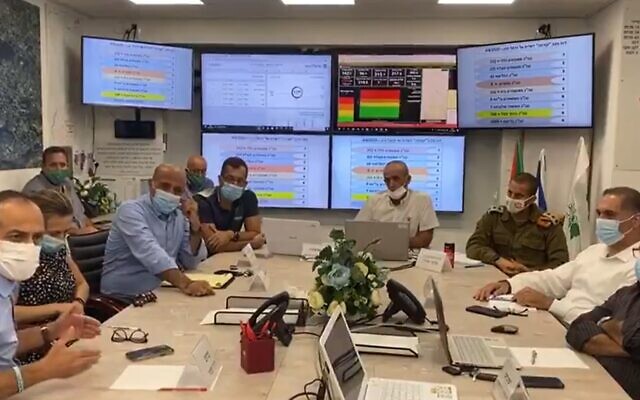 During the curfew, businesses will not be allowed to open apart from those designated as essentia, which are food stores (not including restaurants), pharmacies, opticians’ shops, shops whose main business is selling hygiene products, and businesses that repair phones and computers.

The list was drawn up based on lessons learned during the first round of lockdowns in the spring.

According to Health Ministry data, the total number of coronavirus cases in Israel hit 136,213 on Tuesday evening, of which 106,966 have recovered.

Of the 28,214 active cases, 464 are in serious condition, 139 of them on ventilators. Another 156 are in moderate condition, with the rest displaying mild or no symptoms. Overall, 928 people are hospitalized with the disease. The death toll rose to 1,033.

The full roster of cities and neighborhoods being placed under nightly curfew: