The Knesset on Monday passed a bill that allows ministers to give up their positions as Knesset members in order to enable a different member of their party slate to take their spot in parliament.

The so-called Norwegian Law was approved in its second and third readings with 66 votes in favor and 43 against. It required a majority of 61 votes to pass.

Blue and White were said to be annoyed that Prime Minister Benjamin Netanyahu was not present for the vote, with sources close to the premier saying that even without him the bill was assured to gain the minimum 61 votes in needed to be passed, the Ynet website reported.

The Norwegian Law has faced criticism for increasing government expenditure by maintaining ministers as well as the lawmakers to taking their places in the Knesset.

The law allows any MK who is appointed to a cabinet post to resign temporarily from the Knesset, thereby permitting the next candidate on the party’s list to enter parliament in his or her stead. Under the bill’s new rules, if that minister later resigns from the cabinet, they would automatically return to the Knesset.

At least 12 ministers or deputies are expected to eventually use the Norwegian Law, introducing a similar number of new MKs to the Knesset at an estimated cost of around NIS 20 million ($5.7 million) a year.

Opposition leader Yair Lapid of the Yesh Atid party slammed the legislation for its high cost.

“In the dead of night, like thieves, the coalition passed the Norwegian Law,” Lapid said. “The fifth Netanyahu government is breaking all records for disconnection and opacity. Instead of unemployment benefits for independent workers and grants for the unemployed, they are wasting public funds on jobs.” 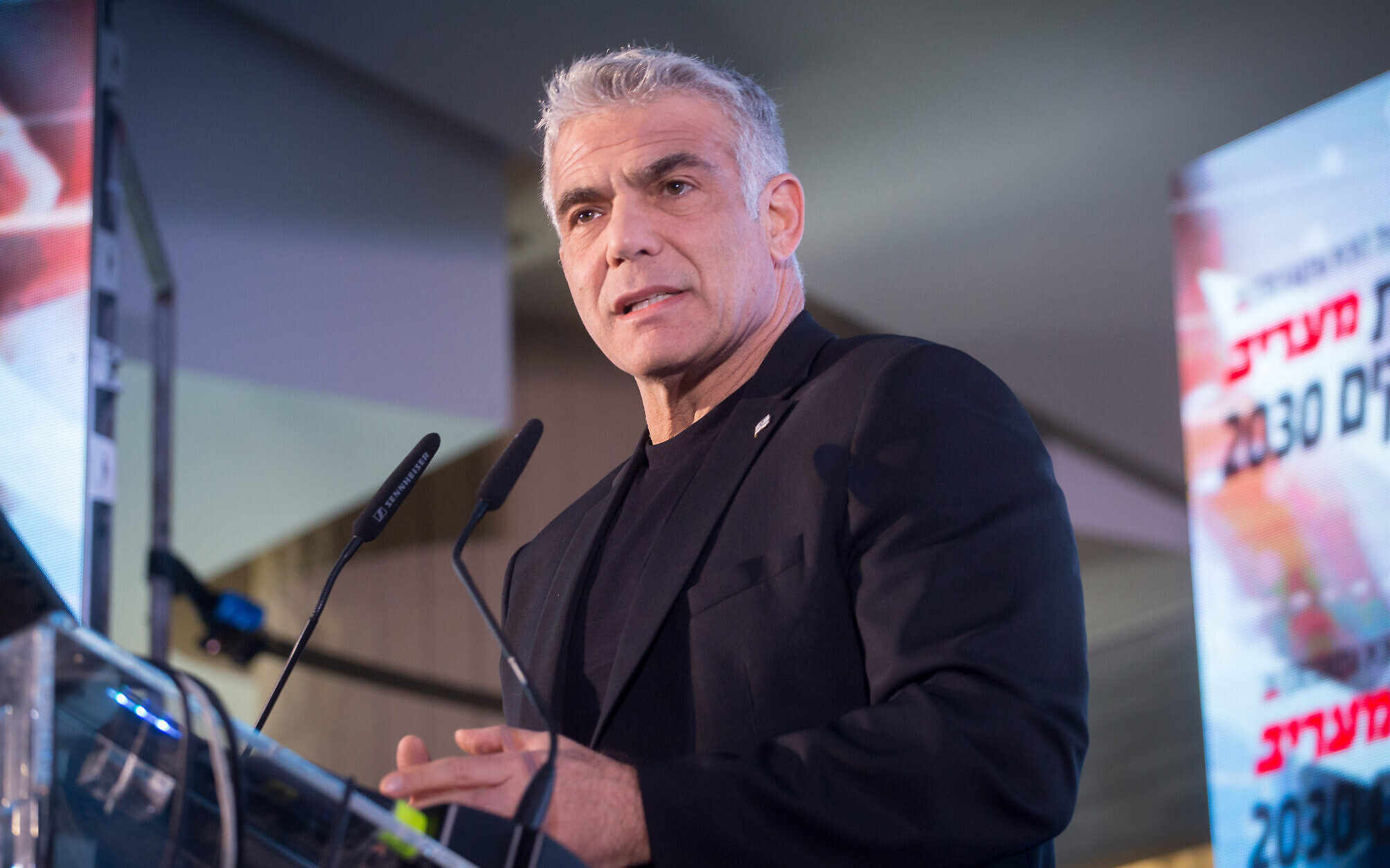 The law is important to Blue and White because of its 15 MKs, only three are not currently serving ministers or deputy ministers and are able to spend time in Knesset committee and on daily affairs.

Opposition lawmakers have strongly condemned the bill, saying the unity government only needs it because it has allowed the creation of so many cabinet positions under the coalition deal that it doesn’t have enough manpower left to sit in parliament as lawmakers.

The bill made it to the plenum for its final readings only after a stand-off between the Likud party and its unity government partner the Blue and White party was resolved, reportedly with an agreement to reopen the unity government deal for adjustment.

Netanyahu had delayed the vote on the legislation for leverage, with reports saying he was seeking in return to make a retroactive change to the unity coalition deal between Likud and Defense Minister Benny Gantz’s party.

The coalition deal agreed on by the parties stipulates that if the High Court of Justice strikes down parts of the coalition deal before November 2020, a new election will be called and Netanyahu will remain transitional prime minister.

But if the Knesset is dissolved and elections are called between November 2020 and November 2021 — after a six-month “emergency period” ends but before Gantz becomes prime minister as part of the power-sharing deal — Gantz would automatically become the transitional prime minister instead of Netanyahu. The clause is meant to serve as a deterrent against Likud ending the partnership and calling new elections before Gantz gets a chance to be premier.

But Netanyahu was now reportedly demanding that the deal be changed so that a High Court intervention in the deal at any time during the government’s tenure will trigger a new election, with Netanyahu at the helm.

Netanyahu fears that the court will ban him from serving in the role of alternate prime minister starting in November 2021 as agreed upon with Gantz, due to his criminal trial. His latest demand came as he feared the court could make such a decision after November, according a Channel 12 news report. 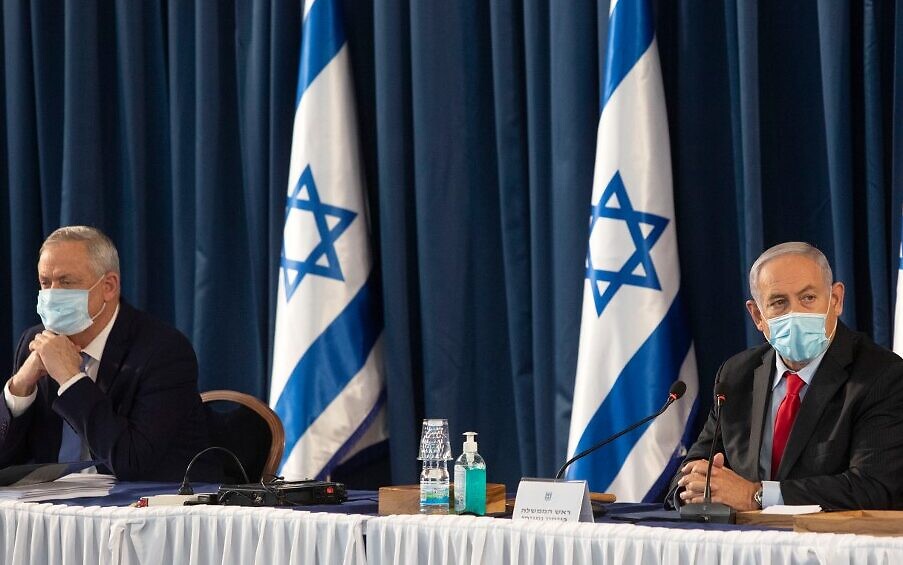 A source in Likud told the Kan public broadcaster that Gantz agreed to make the change sought by Netanyahu.

“Blue and White caved. We will amend the agreement and ensure the continued term of the alternate prime minister in a year and a half,” the source said.

However, Blue and White sources speaking to media denied this, saying the party had agreed only to consider changing the deal.

The bargain was reached despite an earlier meeting between Likud leader Netanyahu and Gantz reportedly failing to produce a settlement.

Gantz told Blue and White party members Monday he would be holding a meeting to update them on the situation, Channel 12 reported.

Netanyahu is also said to be asking that the coalition deal be changed so that the government would serve for a full four-year term instead of the current three, concerned that the three-year clause would hand the court grounds to annul the deal.

Monday’s agreement between the two sides came amid reports of increasing tensions in the government.

Netanyahu has reportedly been irked by statements made recently by several Blue and White ministers, including Justice Minister Avi Nissenkorn defending the justice system from the premier’s attacks and Social Equality Minister Meirav Cohen saying her party “doesn’t believe Netanyahu or in Netanyahu.”

In addition, Blue and White’s leaders are said to be against Netanyahu’s stated intention to unilaterally annex parts of the West Bank next month.

The Netanyahu-Gantz coalition deal allows the prime minister to advance moves to annex West Bank territory allocated to Israel under the Trump administration’s peace proposal from July 1, whether Gantz backs such moves or not. But the US is reportedly anxious that Israel not move ahead with unilateral annexation unless both key components of the unity government — Netanyahu’s Likud and Gantz’s Blue and White — are on board.

While Gantz and his party deputy, Foreign Minister Gabi Ashkenazi, both publicly back US President Donald Trump’s “Peace to Prosperity” plan, unveiled in late January, they have not endorsed Netanyahu’s planned unilateral annexation of territory allocated to Israel under the proposal.

The Norwegian Law takes its name from Norwegian legislation mandating that all government ministers resign their seat in the parliament. That process is intended to create a separation of powers between the executive branch and the legislature.

The Israeli version, however, comes primarily in response to what many consider to be a short-handed Knesset, with a significant number of parliamentary seats effectively inactive because their holders are in the cabinet. Under current law, serving cabinet ministers are severely limited in their functions as MKs. They are not allowed to serve as speaker or deputy speaker, to sit on committees or even to propose bills.

A similar law allowing just one minister per party to resign was passed in the last Knesset, but did not apply to future governments.