The Zionism Victoria, in partnership with I Am Art Gallery, is pleased to present Oh Australia Oh Israel, an exhibition of the art of renowned Israeli artist, Yosl Bergner. The exhibition, in honour of Bergner’s 95th birthday, emphasises his work related to the time he and his family spent in Australia. Several new pieces, including sculpture, never before exhibited in Melbourne, will be on display.

Although in Australia for only 13 years, his time in the country greatly influenced his art, while he, in turn, had a strong influence on modernist art in Australia. Bergner was born in Vienna, and when he was quite young, his father, the renowned Yiddish writer Melech Ravitch, brought the family to Warsaw, then the centre of Yiddish culture. Ravitch witnessed Hitler’s rise to power and became involved in a serious investigation of the Kimberley Plan – an unsuccessful scheme to bring Jewish refugees from Nazism to settle in Australia’s northwest. He was able to bring his wife and children to Melbourne before the outbreak of the war, enabling them to escape the fate that awaited them. 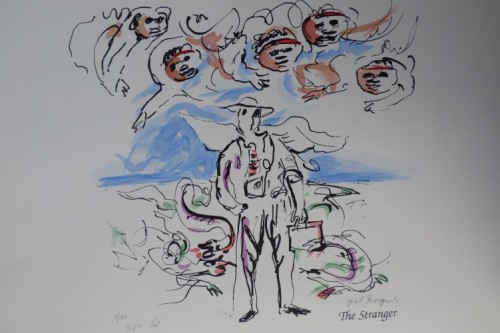 Bergner was 17 years old when he arrived in Melbourne, and in spite of great poverty – his father left Australia a year after Yosl’s arrival – he was able to study at the National Gallery School and painted every day even while working in a variety of menial jobs to ensure he and his sister did not starve.

Bergner’s work from his time in Australia reflects the strong connection he felt with the suffering of the disaffected including the hungry and poor of urban Melbourne in the latter years of the depression, Aborigines with whom he related as outsiders in their own land, and his own people whose world and culture was destroyed on the other side of the world. During his time in Melbourne, Bergner befriended and influenced many of the local artists, such as Sidney Nolan, Albert Tucker, John Perceval and Arthur Boyd, who became the leaders of modern Australian art. 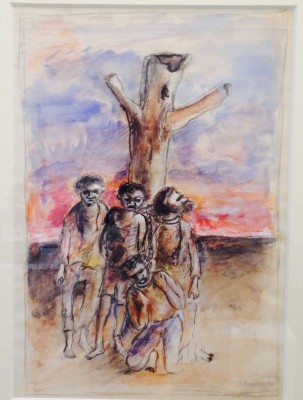 Bergner left Australia in 1948 and eventually settled in Israel, initially in Tzfat and then in Tel Aviv where he has lived and worked since 1957. One of Israel’s most acclaimed artists; he has illustrated many classics of Israeli literature and was awarded the Israel Prize in 1980. For his 90th birthday, the Tel Aviv Museum held a major exhibition of his work, focused primarily on his “Kafka period”. That same year, Bergner began to explore a new medium – sculpture – with many of his new pieces inspired by his early paintings. Even at the age of 95, Bergner can be found each day in his Tel Aviv studio painting and sculpting.

Although he has not lived in Australia for over sixty years, his connection to Australia has remained strong. A series featured in the exhibition is a set of beautiful, colourful drawings depicting his father’s unusual  journey to the Kimberleys with an Aboriginal assistant and an Italian truck driver. He has also revisited some of his earlier work related to the dispossession of Aborigines, using both sculpture and colour to reflect the evolution of Australia regarding its indigenous people. 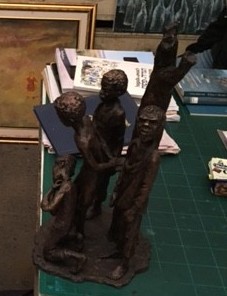 The exhibition will take place 9-18 October 2015 at The Attic Gallery, 297a Glen Huntly Road, Elsternwick. In addition to viewing, there will be opportunities to acquire some of the pieces, including a beautiful limited edition Haggadah illustrated by Bergner. The gallery will be open for visitors Monday through Thursday 12 noon – 2:00pm and 4:00 – 6:00pm, Fridays 12 noon – 3:00pm and Sundays 2:00 -5:00pm. A gallery talk will take place Sunday 11 October at 2:00pm. Visitors may visit at other times by appointment.

To make an appointment or to learn more about Yosl Bergner and his artwork, contact Shaike Snir at 0417 383 994. For more information regarding the exhibition, please contact the Zionist Council of Victoria, 9272 5544 or admin@zionismvictoria.org.au.